Kaitlyn Dever is an American actress who appeared in the Last Man Standing. Kaitlyn is low key about her love life. 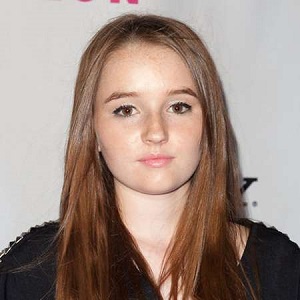 “It's really important that people know about it and the issue in schools because it happens every day to people and it really hurts when people get bullied.”

What is the relationship of Kaitlyn Dever?

The actress likes to keep her personal information secret. She likes to avoid questions regarding her relationships and affairs.

She is currently busy in her career and she might be searching for the perfect one for her.

Her best friend is a Film Director, Jason Reitman.

Who is Kaitlyn Dever?

Kaitlyn Dever is a popular American actress and model. The beautiful actress is best known for her role as Gwen Thompson in ‘An American Girl: Chrissa Stands Strong.

She is also widely recognized for her role as Moretta McCready in ‘Justified’, Jayden Cole in ‘Short Term 12’, and Eve Baxter in ‘Last Man Standing’.

She was born on December 21, 1996, in Phoenix, Arizona, USA. Her birth name is Kaitlyn Rochelle Dever.

She showed an interest in acting from the age of 5 and her parents sent her to an acting school.

From an early age, she participated in ballet, gymnastics, and skating. Then, her family shifted to Dallas, Texas.

She has got a pet dog named Banjo. And, she wants to host the SNL show and be on Jimmy Fallon’s show.

Kaitlyn holds American citizenship and her ethnicity is Caucasian.

She enrolled at the Dallas Young Actors Studio for a month-long acting program.

Before Kaitlyn Dever made her way toward L.A., she appeared in a number of commercials. Her first notable role was in the ‘American Girl: Chrissa Stands Strong’ as Gwen Thompson in 2009.

She made her appearance in the TV series ‘Make It or Break it’ as Adorable Girl and ‘Modern Family’ as Bianca Douglas in the same year.

After a year, she portrayed the role of Paige in ‘Private Practice’ and as Escapade Dunfree in ‘Party Down’.

She became more recognized for her role as Krystal in ‘The Spectacular Now’ and as Jayden Cole in ‘Short Term 12’ in 2013.

She has starred in the films Them That Follow and Booksmart, both released in 2019.

Dever starred in Coastal Elites television special directed by Jay Roach for HBO in the year 2020.

She also played Betsy Mallum in the Hulu miniseries Dopesick in 2021.

Kaitlyn was nominated for BTVA Video Game Voice Acting Award in the category Best Vocal Ensemble in a Video Game for ‘Uncharted 4: A Thief’s End in 2017.

She was also nominated for Young Artist Award in the category Best Performance in a Feature Film-Supporting Young Actress for ‘Bad Teacher’ in 2012 and nominated for others several times in her career.

As of 2022, she has an estimated net worth of around $4 million as per the sources.

She has accumulated that sum of money from her acting career. However, her salary and income are under review.

There was a rumor that she was in a relationship with Ansel Elgort but neither of them confirmed their relationship.

Kaitlyn Dever has an hourglass body shape with a height of 5 ft. 3 inches and she weighs 53kg.