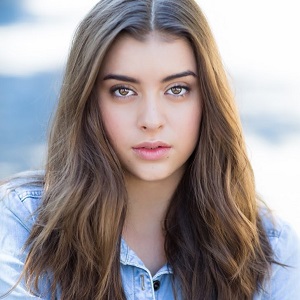 The young and talented social media personality, Kalani Hilliker is dating another dancer Brandon Chang since 2018.

Prior to this, she was in a relationship with Hayes Grier. She has also dated Peyton Meyers before.

Who is Kalani Hilliker?

Kalani Hilliker is an American dancer, actress, and model. She has also appeared on the television as a contestant on the Lifetime reality series Abby’s Ultimate Dance Competition.

After her fame in dance shows, she also got a chance to star in movies such as Shake It Up and several other TV series.

She was born on 23 September 2000 in Phoenix, Arizona, United States. Talking about her parents, she is the daughter of Matthew Hilliker (father) and Kira Girard (mother).

She has two siblings, her brothers, Jax, and Jett Hilliker.

Her ethnicity is Caucasian and her nationality is American. Her academics history is not revealed.

Kalani Hilliker had started her career in the year 2011. She had gained prominence from Lifetime’s Dance Moms along with her mother Kira Girard. In  2013, she had a small role in one episode of the short-lived ABC Family television series Bunheads.

Furthermore, she has also made appearances in ‘America’s Got Talent’ and ‘The View.’ Kalani has also acted in TV shows including ‘Bunheads’, ‘Breaking Brooklyn’ and ‘Swiped.’

Moreover, she also has also featured in a few music videos such as ‘It’s A Girl Party’, MattyB’s ‘Turn Up The Track’, Kendall K Vertes’s‘Wear ‘Em Out’ and ‘My Name.’

Moreover, Kalani is also a YouTuber now. She has around 744k subscribers on YouTube. Her videos are loved by the younger audiences and get more than 200k views in each video.

She has an estimated net worth of around $2 million but her salary is not revealed yet. She is living a lavish life with the help of her multiple careers at such a young age.

Unlike other celebrities, there are no controversies or rumors about her professional as well as personal life.

Kalani Hilliker has a height of 5 feet 4 inches. Her body has a weight of 53 kg. She has light brown hair and hazel eyes.

She is also active on TikTok with over 2.3M fans.

Is Kalani Hilliker dating a fellow dancer boyfriend? She has revealed about him on Twitter and Instagram