Who is Kali Muscle is married?

Kali Muscle is previously married to Dvyne Kirkendall, a model, and makeup entrepreneur. Besides that, there are no details about their marriage date. 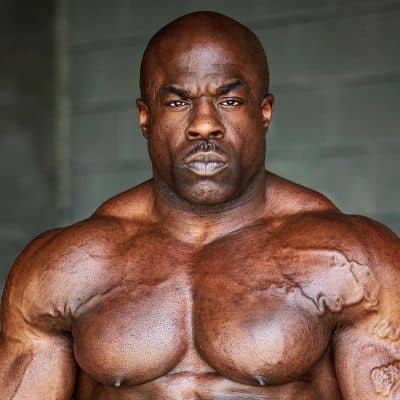 Who is Kali Muscle?

Kali Muscle is an American Actor, Bodybuilder, and Content creator. Kali Muscle is famous for LMFAO: Sexy and I Know It Music Video as a Bodybuilder (2011), The Dog Who Saved the Holidays TV Movie in the role of Mikey (2012), and Raising Hope TV Series in the role of Brett (2014). In 2020, he appears as Bones in Bullet Ride (an Action drama).

Kali was born on 18th February 1975 in Oakland, California, the U.S. His real name is Chuck Kirkendall. Talking about his parent’s identity is under review. However, he holds American nationality with mixed ethnicity. Moving toward his educational background, there is no info.

Kali used to live with his stepmother and step-father who treated him badly. Besides that, he grew up in an extremely violent and crime-ridden area. Moreover, his oldest brother killed himself, while Muscle was playing on the ground. This incident leads him down the dark road of depression and anger.

Kali debuted in LMFAO: Sexy and I Know It (Music video) as a Bodybuilder. In the same year, he played the role of a super soldier in Wonder Woman (a TV Movie). Similarly, in the following year, he was seen in many Music videos such as Crispus Attucks: Today Was a Good Day, and Internal Behaviors part 2: The Regurgitation.

Besides that, in 2012 he made his appearance in many TV Series including Savior, Wilfred, Workaholics, The Dog Who Saved the Holidays, and Applebaum. In the next year, he played the role of Bouncer in White T (an Action movie). Muscle was cast as Brett in Raising Hope (TV Series) in 2014. Moreover, in the same year, he played the role of Life Coach in Maury (TV Series).

Moreover, he was portrayed Glasya Labolas in The Taker (Horror) in 2016. In the following year, he played the role of Bodybuilder in Anabolic Life (TV Series). In 2020, Kali appears as Bones in Bullet Ride (Action- Comedy Movie).

According to Millyus.com, there is a controversy that Kali was arrested for robbery and sent to San Quentin State prison. During that time, he caught up in many more troubles  After spending 11 years in prison, he finally get out and decided to try something Positive.

However, after years there is a rumor that he is cheating, While her ex-wife, Dvyne Kirkendall accused Kali of infidelity.

Kali Muscle stands at the height of 5 feet 10 inches with a 111kg weight. Besides that, he has a black eye with a shiny bald head.