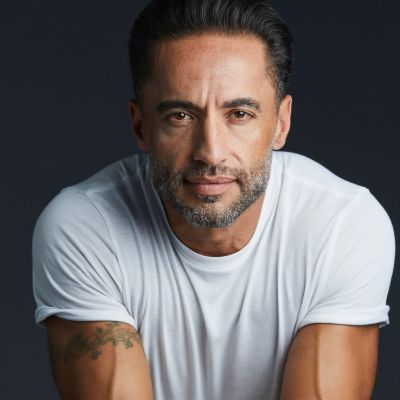 Talking about his love life, Kamar de Los Reyes is joyfully living a married life with Sherri Saum. Sherri is a renowned American actress, model, and producer who is famed for her role in Beggars and Choosers, Rescue Me, In Treatment, Sunset Beach, and One Life to Live.

The couple met for the first time on the set of One Life to Live in 2001. They tied the knot after dating for some years on 26 May 2007. The lovebirds had their first child as twin sons, John Ruben de Los Reyes and Michael Luis de Los Reyes in May 2014.

Also, Kamar has one son from his previous partner, Caylen.

Who is Kamar de Los Reyes?

Kamar de Los Reyes is a well-recognized Cuban-Puerto Rican theater, television, and film actor. Reyes is widely famed for his role as Antonio Vega on the ABC soap opera, One Life to live, and as Raul Menendez, the main antagonist of the 2012 video game, call of the Duty: Black Ops II.

Moreover, he is also named for his role as Jobe a demon in Sleepy Hollow in season 4 and is currently playing a detective on The Rookie season 3.

Kamar de Los Reyes was born on 8 November 1967. At present, his age is 53 years old. Likewise, his birthplace is San Juan, Puerto Rico.

Likewise, Kamar has two sisters: Lily and Ilde, and they reside in Las Vegas. His dad is a well-named Cuban percussionist, timbalero, and educator.

Talking about his nationality, Reyes holds an American as well as Puerto  Rican identity whereas his ethnicity is mixed.

Regarding education, the famed actor studied at the Backstage Dance Studio. Likewise, he attended high school in Las Vegas with Charisma Carpenter in Gorman High School.

Kamar began his professional career portraying the role of Chicano boxer named Pedro ‘Roadman’ Quinn in 1994’s acclaimed theatrical production of Blade to the Heat. Similarly, he also emerged along with Patrick Stewart as a dashing, if thick-tongued Ferdinand in a 1995 production of William Shakespeare’s The Tempest.

Reyes was listed as one of the Fabulous 50 peoples by People Magazine in the year 1997. Further, he also featured in a television movie, The Way She Moves in 2001 opposite Annabeth Gish and fellow soap opera star Daniel Cosgrove. The famous actor has performed in the controversial movie, Love and Suicide and also in Toni Braxton’s video, Spanish Guitar.

Kamar has also made several guest appearances on shows like Law & Order and CSI: Miami. He featured along with James Woods, Ed Harris, and Sir Anthony Hopkins in Oliver Stone‘s controversial biopic, Nixon.

The superstar has also played the voice acting and the motion-captured body acting of the prime antagonist, Paul Menendez, in the video game named Call of Duty: Black Ops II.

It is reported that Kamar de Los Reyes has an estimated net worth of $3 million.

Kamar has never been part of any controversial matter or rumors till now. The actor has been preoccupied with his professional and private life.

It seems that Reyes prefers enjoying his personal life and does not want to merge it with his professional life.

53 years old famed actor has dashing looks, muscular and athletic looks, and an admirable personality. He stands at a height of 5 feet 10 inches.

Furthermore, Reyes has brown eyes whereas his hair is black.

Regarding his social media presence, Kamar de Los Reyes is an active personality on social media. Kamar has more than 10.4k followers on his official Instagram account @delosreyeskamar.

He is also active on Twitter with around 9.8k followers.

Moreover, Reyes is also available on Facebook with nearly 5.3k fans and supporters.