Posted by MarriedBiography Posted on February 14, 2021 | In Child , Married , Relationship
Share this 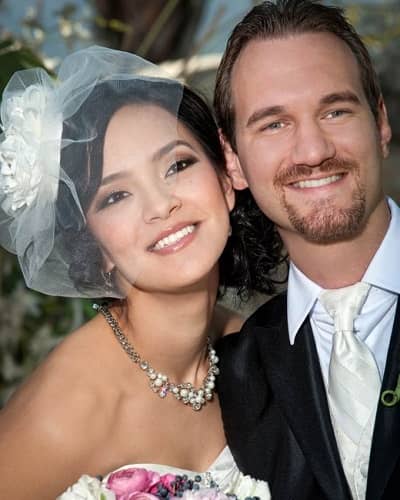 Kanae Miyahara is the wife of Nick Vujicic who is a motivational speaker as well as an evangelist.

How did Kanae Miyahara and Nick Vujicic meet?

Kanae Miyahara and Nick Vujicic fell in love at the top of a Bell Tower in McKinney, Texas at the ‘Adriatica’. It was the night when he spoke to 16 people and watched the Butterfly Circus. Nick shared the ministry’s goal and heart in reaching the world. Their eyes connected that night and they had fireworks in their heart and minds.

They first met in 2008 when she and her elder sister Yoshie came to his speech with his friend Tammy. Kanae and Yoshie were babysitting Tammy and her husband Mark’s children. Tammy invited Nick to meet Kanae and her sister. When Nick met her, he could not take his eyes off her. He was unable to concentrate on what he was saying. He revealed,

“After my speech, I stuck around to talk with members of the audience. Kanae and Yoshie came with Tammy to say hello, and I was very happy to meet them. In fact, when they tried to walk away to make room for other people wanting to speak with me, I told them to stay close so we could get to know one another.”

Whenever he had a break, he would try talking with her. He found Kanae self-assured and kindhearted. When Kanae and Yoshie were preparing to leave, he asked her if she would want to stay in touch.

Nick Vujicic decided to propose to her for marriage after dating for a while. For Kanae, Nick was a handsome man and her perfect match. Many people question Nick how he would put a ring on her finger due to his disability. But he solved the problem. Nick shared,

“Baby, can I kiss your hands? I’m putting the ring all the way down on her finger. Baby, I love you, would you love to marry me and spend the rest of your life with me?”

Also read 5400 meters above the sea level proposal! Caroline Stanbury said ‘Yes’ to her boyfriend Sergio Carrallo in the Himalayas of Nepal

Kanae Miyahara and Nick Vujicic walked down the aisle on 12th February 2012. Before meeting Kanae, he had doubts whether he would ever get married or not. He had never met anyone who loved him and wanted to spend their rest of the lives with him. But his doubts were cleared by Kanae who loves him endlessly.

His physical disabilities never came in between the beautiful couple. Kanae is very happy being with Nick and feels he is complete. Likewise, after getting married they lived in southern California where he focused on his writing and speech while Kanae took care of the household.

How many children does Kanae Miyahara have?

Likewise, they also have twin daughters Olivia Mei and Ellie Laurel. Kanae has homeschooled her kids and encourages other parents to do so as well.

Nick Vujicic is a motivational speaker as well as an evangelist. He was born with a rare disorder, tetra-amelia syndrome which is the absence of arms and legs.

He has formed an international non-profit organization Life Without Limbs as well as a secular motivational speaking company named Attitude is Altitude.

Furthermore, he has also appeared in the role of Will in the short film The Butterfly Circus for which he has also won Best Actor in a Short Film. Read more bio…