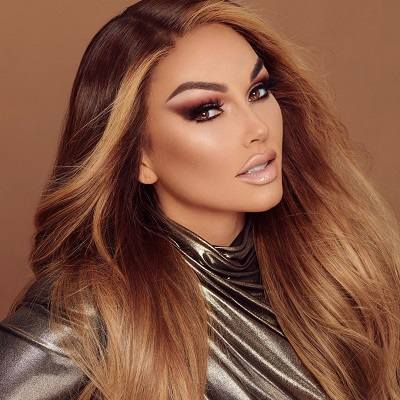 However, she shares a very strong bond with the Lan Ford (a.k.a Doctor Ford) as a best friend. Also, they were together during the quarantine too. Also, she often shares her pictures with him together.

She was married twice. From the first marriage, she has a son, Jordan. They got divorced a long time before. After that, she was married to another man.

Together, she has two children including a son, Blake, and a daughter, Alani. She prefers not to speak about her previous marriage. Hence, she has never shared never details on the matter.

Later, Kandee was in a relationship with the singer, Michael Castro. Also, they were engaged on the 13th of September 2015. Together, they have a daughter, Elyse.

Who is Kandee Johnson?

American Kandee Johnson is a Steamy Award-winning make-up artist and YouTuber. She is renowned for her make-up tutorials that went viral on the web.

Kandee Johnson was born on the 9th of July 1978 in a suburb of Los Angeles to Dean R. Johnson and Shannon D. Johnson. He is of British-Scottish ethnicity.

She shares a very strong bond with her father, Dean. He passed away back in 2012. Kandee grew up with her younger sister, Tiffany Myers.

Talking about her educational background, she graduated from a beauty school. In high school, she describes herself as a very shy person. Also, she had no one to eat lunch with.

Soon after graduation, Kandee Johnson landed her first Soon after that, she started working with various TV series, commercials, and shows as a makeup artist. In such projects, she worked with many celebrities including the model, Janice Dickinson.

Despite earnings high popularity, she always wanted to share her knowledge with too many as possible. With the sole purpose, she started her fashions and lifestyle blogs in 2008 that earned huge readers. Moving forwards, she started her writes two blogs; Kandee Johnson & Kandeeland.

In the following years, she created her own YouTube channel. In the channel, she shares makeup tips, tricks, and DIY tutorials. Within no time, she earned millions of subscribers. As of now, she has more than 3 million subscribers.

Despite, digital platform, she has also featured the cover of the magazine including Cosmopolitan, Elle, and Glamour. Also, she has made her appearances in the shows like Good Morning America, The Late Late Show with James Corden, and Fablife. Also, she has judged the show, How Do I Look.

As of 2020, she has an estimated net worth of $3 million. As a make-up artist, her salary is in the range of $23k to $102k. Besides that, her earnings as a blogger have a significant contribution to her net worth.

Apart from that, her YouTube channel has earnings in the range of $448 to $7.2k.

Once Kandee had been in the news when she left her 12 years old son on his own and went for a business trip to Los Angeles. She was accused of leaving her child three days unsupervised in a house with dirty dishes and food remnants. At the time, she was charged for child endangerment.

A criminal complaint was launched when her son with 12-years old friend was trying to set something on fire. After that, Deputy was about to play the boy with child protective services. However, her dad took custody of his grandson.

Kandee Johnson has brown eyes with brunette hair. She prefers to experiment with her hair color from pink, blonde, and white.

Her height is 5 feet and 7 inches and weighs around 68 kg.

She also has a self-titled YouTube channel with around 3.83 subscribers and more than 436.4 million views.

You may also read the bio of Makenzie Vega, Sherri DuPree, and Rupert Hine.