Updated On January 25, 2023 | Published By: Rounak Kumar
Share this
Married 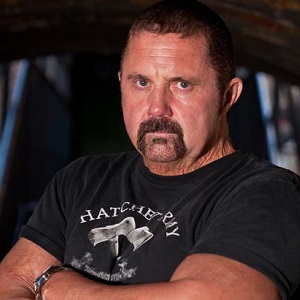 What is the relationship of Kane Hodder?

Kane Hodder is a married man as of now. He is married to a beautiful woman named, Susan Murphy.

The couple had their marital ceremony on October 27, 1984. Until now, the couple has two children together.

They are Reed and Jace.  Other than that, there is no more information available regarding his personal life.

Who is Kane Hodder?

Kane Hodder is a famous actor, TV personality, author, and stuntman. He is active in these professions since 1983. He is also popular by his nickname, “Cement Head”.

Presently, he is a prominent figure among the media for starring in the four installments of Friday the 13th film series. He played the character of Jason Voorhees.

Kane was born Kane Warren Hodder on April 8, 1955, in Auburn in the state of California. According to what he heard from others, he is the largest child born in Auburn with 11 pounds and 9 ounces.

The ethnicity of Kane is a mixture of English, German, Swedish, and Norwegian. Born on April 8, 1955, he is 62 years as of now. There is no other detail about his early life. Similarly, information about his childhood days is not available too.

As per his education, there is no enough information regarding it.

Kane Hodder is active in acting and stunt career since 1983. In 1983, he did the stunt for the film, “Lone Wolf McQuade”. The next year, he performed the stunt in the film, “Hardbodies”. Similarly, he has performed stunts for several movies. Some are “Avenging Force”, “The Patriots”, “Prison”, “Double Trouble”, “Leatherface: The Texas Chainsaw Massacre III”, and others. He has performed stunts in movies from the action genre to the horror genre.

Kane is also an actor. He initiated his acting career in 1983. Afterward, he portrayed several roles in films like “Hardbodies”, “City Limits”, “Prison”, “Fair Game”, “L.A. Heat”, and others. Also, he plays the famous role of Jason Voorhees in the four installments of “Friday the 13th series”.

Furthermore, he is also an author. He is famous for publishing the book, “Unmasked: The True Life Story of the World’s Most Prolific Cinematic Killer”.

Is Kane Hodder involved in any rumors and controversies?

Kane avoids the show-off and extravagant life that drags him to the Medias’ tittle-tattle. Similarly, he likes to keep his image clean ignoring the rumor. Presently, he is far away from any controversies and criticism. Therefore, there are no other rumors that surround his personal or professional life.

Kane Hodder stands tall at the height of 6 foot 2.5 inches and weighs 105 kg. Similarly, he has a huge body with heavyweight and ceiling touching height. His hair color is dark brown and his eye color is hazel green.