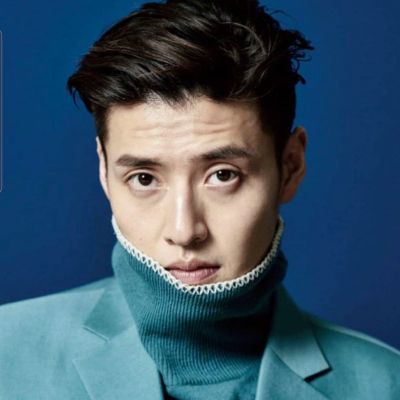 Talking about his love life, Kang is presently single and he is not dating anyone at the moment. As per officials, the actor is considered to be a highly devoted actor and is highly dedicated in his work.

Ha-neul has lots of fans and followers for his great looks and outstanding work. However, his name has been linked with Lee Ji Eun. She is known as IU as her stage name. The duo has worked together in Moon Lovers: Scarlet Heart Ryeo. Moreover, they were seen before Kang’s military service.

Who is Kang Ha-neul?

Kang Ha-neul is a well-recognized South Korean film and television actor. Ha-neul is widely famed for his role on Twenty(2015), When the Camellia Blooms(2019), and Moon Lovers: Scarlet Heart Ryeo(2016).

Kang Ha-neul was born on 21 February 1990. At present, his age is 31 years old. Likewise, his birthplace is Busan, South Korea.

Not much known about his father and mother’s details, Kang has been secretive towards his parent’s details. Moreover, he has a younger brother and he is involved in show business. His dad was a folk singer and also taught him to play and learn the guitar during his childhood.

Talking about his nationality, Ha-neul holds a South Korean identity whereas his ethnicity is Asian(South-Korean).

Regarding education, the actor attended at Chung-Ang University to study theater in Seoul, South Korea. He was an active participant in the university cultural activities and gained the attention of producers and directors.

Likewise, Kang’s performance was highly appreciated in Assassins in 2012. Later, the actor shifted from theatre to the big screen portraying the role of Yeon Namsan in the South Korean war comedy movie named, Battlefield Heroes in 2011. The movie was displayed at the New York Asian Film Festival.

The famous actor performed as the Lead star in the musical Harold and Maude. Ha-neul then participated in season 3 of the South Korean travel reality show named Youth Over Flowers. His recent performances are Midnight Runners and the mystery thriller, Recall the Night.

Similarly, Kang has performed in some other television series like My Mom! Super Mom!, Hometown Over the Hill, To the Beautiful You, Monster, Two Weeks, Angel Eyes, and so on.

The Korean actor started his military service on 11 September 2017 at Nonsan Korean Army Training Center. Likewise, the actor was selected as honorary ambassador of the Military Manpower Administration(MMA).

The ceremony held at the Air Force Hall in Yeongdeungo, Seoul. He took part in different MMA events until December 2019. later, Ha-neul was released on 23 May 2019.

South Korean actor, Ha-neul has earned a handsome amount of money. He has been active in his profession from the year 2006 till the present.

It is reported that Kang Ha-neul has an estimated net worth of $1 million.

However, the well-celebrated personality has not disclosed his exact salary, earnings, and assets details till now.

31 years old actor, Kang Ha-neul has dashing looks, a cheerful smile, a muscular and athletic body, and a super attractive personality. He stands at a height of 5 feet 11 inches. Also, he has a balanced body weight of 67 kg.

Furthermore, Ha-neul has brown eyes whereas his hair is brunette.

Regarding his social media presence, Kang Ha-neul is an active personality on social media. Kang has more than 292k followers on his official Instagram account @_kanghaneul.

He is also active on Twitter with around 3.4k followers.

Moreover, Ha-neul is also available on Facebook with nearly 40.5k fans and supporters.