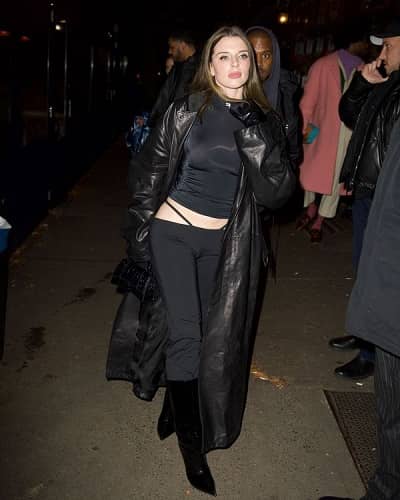 Who is Julia Fox?

Julia Fox is an Actress and model. She debuted in the entertainment industry from the 2019 movie Uncut Gems starring opposite Adam Sandler.

Initially, she did modeling, posing for Playboy’s final nude issue in 2015. Moreover, she has two books in which she has used her own bloodstain silk canvases.

Likewise, she also worked as an investor and manager.

Julia Fox was spotted with Kanye West on a date night at Carbone. Designer Yeezy also gave them company.

According to the sources, West called her up in 2022 at Game Changers with other rappers Future, Quavo, and French Montana.

Reports of Kim’s plans for the divorce

Page Six reported that Kim has decided on the divorce from Kanye but is just waiting for the right moment to put in the papers. An insider told the media outlet:

“Kim has the whole divorce planned out but she’s waiting for him to get through his latest episode.”

You may like to read Kim’s Husband Kanye West & Irina Shayk Romantic Affair in France On his Birthday! Are they Dating?

Julia shared that before she entered the entertainment industry, she was addicted to drugs. She was in her teens when she was into drugs and battled with heroin and pill abuse. She said,

“It’s kind of a miracle that I’m okay because a lot of the people I grew up with aren’t doing so well. They’re still on drugs or in jail. A lot of them died,”

Julia was married to Peter Artemiev in 2018. The couple has one child Valentino born on 17 January 2021.

Sadly, Peter was an alcoholic and called him dead beat father. Due to his reason, she decided to split. Julia posted a story dedicating Peter,

“He can be found at most strip clubs, Lucien, Paul’s bbg, Casablanca, the streets etc.”

Despite her ugly separation from Peter, she wishes him good luck in his life. Their divorce and custody battle of their son is in the process.

He is among the most acclaimed musicians of the 21st century and is one of the best-selling artists of all time. He has sold more than 32 million albums and 100 million digital downloads worldwide. More bio…