Kara Eaker is a well-recognized American artistic gymnast. Kara Eaker is not having an affair with anyone presently

Talking about her love life, Kara Eaker is presently single and is not dating anyone at the moment. She is focused on her career and different events that took place time and again.

It seems Kara does not want to get distracted from her career. Moreover, the star has been secretive about her relationship details or related news. She has kept her personal life away from the media. 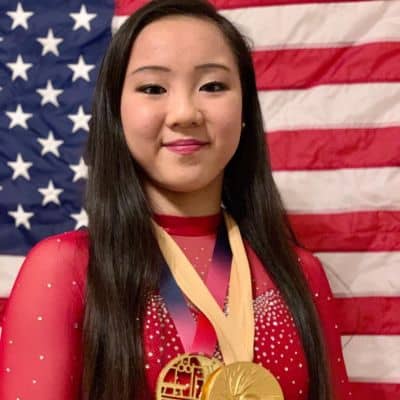 Who is Kara Eaker?

Kara Eaker is a well-recognized American artistic gymnast and a member of the United States women’s national gymnastics.

Kara Eaker was born on 7 November 2002. At present, her age is 18 years old. Likewise, her birthplace is Jiangxi, China.

Kara is the daughter of her father, Marco Wong whereas her mother is Bee Ding. She was adopted by Mark Eaker and Katherin Eaker. Moreover, she has three siblings named Sara Eaker, Katrina, and Aron.

Talking about her nationality, Eaker holds an American identity whereas her ethnicity is Asian.

Regarding education, the athlete pursued her education at Grain Valley High School. Later, she joined the University of Utah and participated in different gymnastics competitions from the college team.

Kara started her career in 2017 making her debut at the 2017 U.S. Classic and ranked third on the balance beam and fifth in the all-around.

Later, she participated in the 2017 U.S. National Gymnastics Championships and placed first on the balance beam.

Additionally, Eaker began her senior debut in 2018 and participated in the American Classic. The athlete was placed first on the balance team, second on floor exercise, and fourth in the all-around.

She also made her appearance in the National Championships and finished seventh in the all-around, second on the balance beam, and so on.

Kara won the gold medal on the balance beam and the bronze on floor exercise on the first day of the Pan American Championship.

In the team competition, the star contributed to these two events toward the United States gold-medal-winning performance.

Next year, the athlete was featured at the 2019 Pan American Games along with Sloane Blakely, Aleah Finnegan, Morgan Hurd, Shilese Jones, and so on.

She ranked fourth in the all-around behind Simone Biles, McCusker, and Grace McCallum. At the World Championships, Kara competed on bars and beam only and earned fourth place.

In the team final, she once again performed a clean routine without her switch ring leap and scored 14.00.

In 2020, her team do not participate in the event due to the COVID-19 pandemic in Italy. Likewise, in 20221, Eaker competed at the U.S. Classic and finished ninth in all-around and third on the beam balance.

At the Olympics, the athlete finished seventh in the all-around and second on the balance beam. She was chosen as an alternative for the Olympics team. Sadly, Eaker tested positive for COVID-19.

A talented gymnast, Kara has earned a handsome amount of money in the early years of her career.

She has not mentioned her exact net worth in the public till now. Eaker has won many awards from the beginning of her career.

However, the sportsperson has not disclosed her exact salary, earnings, and assets details as of 2022.

Kara has never been part of any controversial matter or rumors till now. The athlete has been preoccupied with her professional and private life.

It seems that Eaker prefers enjoying her personal life and does not want to merge it with her professional life.

18 years old star, Kara has beautiful looks and an admirable personality. She stands at a height of 5 feet. Also, she has a balanced body weight of 50 kg.

Furthermore, Eaker has black eyes whereas her hair is also black. Her body measurement is 32-24-35 inches(chest-waist-hip) respectively.

The athlete wears a shoe size of 6(US).

Regarding her social media presence, Kara Eaker is an active personality on social media.

Moreover, Eaker is also available on Facebook at the moment.