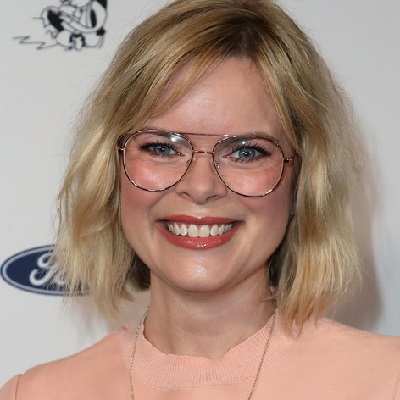 Kara Holden is married to Ryan Devlin. Her husband, Ryan is an actor, host, and producer.

The couple married in June 2009. After the wedding, they traveled to Rome, Florence, Venice, and Capri for their honeymoon.

Together, the couple is blessed with a son (b. 2015). Being a protective parent, they have not shared any details on their child.

Who is Kara Holden?

American Kara Holden is an actress and writer. Holden is renowned as the writer of Carrie Pilby and Middle School: The Worst Years of My Life.

Last, in 2020, she wrote the screenplay for Disney’s Musical Drama, Clouds.

Currently, she is writing for the movie, The Yeggs & the Yahbuts. As of now, the movie is in post-production.

Kara Holden was born in the United States. She is of British-Germanic ethnicity.

Moving to academics, she is graduated from the University of Southern California. From the university, she received the Master’s degree with Honors in MPW. In the university, she was trained under the personalities like Syd Field, Shelley Berman, Dr. James Ragan, and Mel Shavelson.

In the year 1977, she started her career as an actress with the TV series, Clueless. In the series, she appeared in the character role of Shorna. Following that, she featured in TV series like Step by Step, Gilmore Girls, and P.O.V.: The Camera’s Eye in character roles.

After making an appearance in the movie, Pride and Prejudice as Caroline Bingley, After taking a break from her acting career, in 2010, she restarted her career as a writer.

In the year 2010, she made her writing debut with the Comedy-Romance, Meant to Be. The movie starred actors including Kelly Reilly, Mia Maestro, and Kris Marshall.

After the movie, she wrote the screenplay of the movies like Carrie Pilby, Middle School: The Worst Years of My Life. Recently, in the year 2020, she wrote for Disney’s Musical Drama, Clouds featuring the actor, Fin Argus as Zach Sobiech.

She has blue eyes with blonde hair. She has a decent height and an average weight. However, details on her body stats are not available.

She is active on Twitter with the handle, @joydelightsnjoy with 783 followers.

On the platform, she is following the personalities like Jon Cryer, Brene Brown, and Joe Biden.