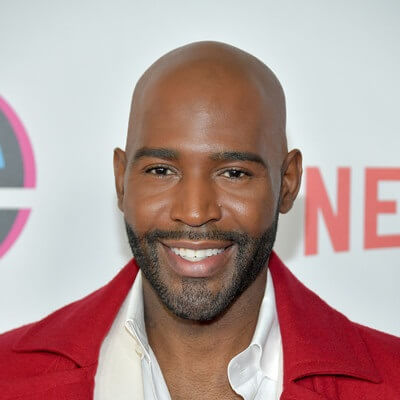 There's so much toxic masculinity out there. I grew up with the notion that the more masculine you are and the less you show emotion, the more of a man you are

There's a lot of 'how to adopt' books, but there's no practical resource for, say, school supplies

My main thing is obviously mental health and well-being, and then my second passion would be politics

the third would be fashion.

Karamo Brown is currently in a relationship. He is engaged to Ian Jordan. His fiance is a director. The duo started dating in 2010. On May 9, 2018, the couple got engaged. They celebrated their engagement on Jordan’s birthday at Hyde Sunset.

Previously, Brown was in a relationship with a girl in high school. He also had impregnated her at the age of 15, which he had no idea about. In 2007, at the age of 27, he was left shocked when he came to know he had a 10-year-old son named Jason. The same year, he accepte, him as his son and has been raising him ever since. Later in 2010, he adopted Jason’s half brother, Chris.

Who is Karamo Brown?

Karamo Brown is an American television personality, author, and activist. Currently, he is the culture expert in the Netflix series Queer Eye. With ‘The Real World: Philadelphia’, he became the first openly gay black man cast on a reality show.

Although there is not much information about them, Karamo shocked people when he revealed his dad stopped talking to him after he revealed to him that he was gay. He used to be very close to his father previously. He explained,

“Growing up, my father was my hero. He called me his champion son. But then, as I started to discover who I am, things changed dramatically. When I was 17 going on 18, I told him that I was gay. Our relationship ended. It split the family apart and we didn’t speak for 10 years.” Fortunately, they are now trying to build a good relationship again.

He has three older sisters. Brown spent his childhood days with his sisters in Coral Springs, Florida. His ethnicity is Jamaican and Cuban.

Talking about his educational background, he went to Marjory Stoneman Douglas High School in Parkland. From there, he graduated in 1999. After that, he went to Florida A&M University.

Karamo Brown started his television career in 2004 with the MTV reality series, ‘The Real World: Philadelphia’ and became the first out gay black man on reality television. In 2016, he appeared in TV One’s The Next 15. Following that, he became the host and producer of HuffPost Live and a contributing host on Dr. Drew On Call.

In 2014, he landed the role of a host and segment producer for the Oprah Winfrey Show. Currently, he is working as the culture expert in the Netflix revival of Queer Eye.

In 2015, he co-founded ‘6in10.org’, an organization that actively works to combat HIV stigma and provides mental health support and education to the black LGBT community.

Moreover, he is the health and wellness ambassador of the Center for Disease Control and the National Black Justice Coalition. Brown worked with President Barack Obama to support his foundation and the My Brother’s Keeper Alliance. In 2018, he received the Human Rights Campaign Visibility Award.

In March 2019, he published a memoir titled ‘Karamo: My Story of Embracing Purpose, Healing, and Hope’.  He competed in the season 28 of the reality competition TV series, ‘Dancing with the Stars’. He teamed up with dancer Jenna Johnson.

In November 2019, Henry Hol published Karamo’s children’s book, ‘I Am Perfectly Designed’, which he wrote with Jason “Rachel” Brown.

Karamo Brown has an estimated net worth of around $3 million. He has earned money from his career as a TV personality and author. There is no information about his annual salary. On average, TV personalities earn around $110k per year.

Brown stands tall with a height of 6ft. 2inch. He weighs around 85kg. He has a dark skin complexion with black hair and dark brown eyes.

During rehearsals for Dancing With the Stars, Brown referred to his co-star and former Donald Trump press secretary, Sean Spicer as a ‘good guy’ in an interview with Access Hollywood. This led to criticism on social media from a lot of people as opposed to Trump. Furthermore, he also revealed that his family got death threats for his public support of Spicer.

Karamo Brown is active on social media sites. He has around 92k followers on Facebook and around 455.5k followers on Twitter. Similarly, he has more than 2.7 million followers.

You may also like to read the Bio, Career, Body Measurements, Net Worth, Social Media, Relationships, and more about Stacie Zabka, Teddy Riley, Molly Hopkins, and more.