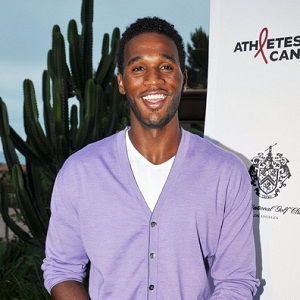 Knocking down big shots when your team needs you. That's what basketball is all about. Tonight was a big win. Hopefully, we can continue to push forward and finish this first half off well

I weighed my options and it turned out that Charlotte was the best place for me. I weighed everything and I wanted to be a part of getting this franchise to the playoffs and beyond.

What is the relationship of Kareem Rush?

Kareem Rush is in a relationship. He is dating Bonnie-Jill Laflin. She is an American well-known actress, model, television personality, and sportscaster.

She is known for her modeling work at Fredericks of Hollywood and Venus Swimwear.

They are in a relationship since the year 2013. They do not share their pictures together on their social media handle.

Who is Kareem Rush?

He has played for different teams in the National Basketball Association (NBA). He played the shooting guard position. Moreover, he is also a singer who has released his single “Hold You Down.”

American retired professional basketball player Kareem Rush was born in Kansas City, Missouri. He was born on 30 October 1980. He is of African American ethnicity and has an American nationality.

His birth name is Kareem Lamar Rush. His mother’s name is Glenda Rush and his father’s name is unknown. He has one younger brother Brandon and another elder brother Jason.

Since childhood, he has built up a strong interest in basketball games. They both play basketball at different levels.

In which school did Kareem Rush attend?

Rush studied at The Pembroke Hill School and attended the University of Missouri. He played college basketball as a standout guard.

Talking about the career journey of Kareem Rush, he started playing basketball professionally in 2002 and he retired in 2014.

He started playing basketball professionally after being selected by the Toronto Raptors in the 2002 NBA draft.

He was immediately traded to the Los Angeles Lakers where he made a name for himself as a sharpshooter.

He was traded to the Charlotte Bobcats during the 2004-05 season. He signed with the Seattle SuperSonics during the 2006-07 season but he was soon released from the team in November 2006 as he slowly recovering from a groin injury.

On 21 December 2006, he signed with ULEB Cup participant Lietuvos Rytas from Vilnius and led his team to the cup final. He was named the MVP of the  2007 LKL All-Star Game on 24 February 2007.

On 21 April, his team also won the  Baltic Basketball League and he was also named the Final Four MVP.

After onwards, Rush played for different teams including Indiana Pacers, Philadelphia 76ers, and Los Angeles Clippers before his retirement.

On 22 January 2014, he officially retired from professional basketball. Besides NBA, he is also a singer who released his debut single “Hold You Down” in 2010.

How much does Kareem Rush earn?

His net worth varies depending on various sources so for now, we can say that his net worth has grown significantly.

Besides these, he is not active on other social sites including Facebook.

Unlike other players, he has neither been in any rumors nor suffered controversy in his life.

Kareem Rush has a height of 6 feet 6 inches. His body weighs 98 kg. He has black hair and dark brown eyes.