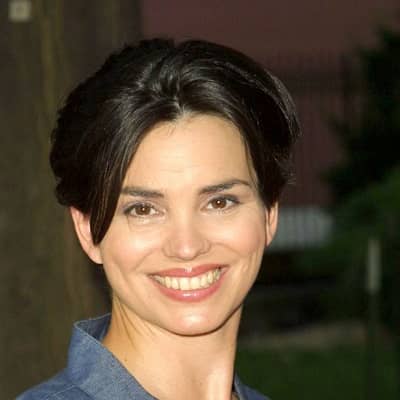 Karen Duffy is a married woman. She tied the knot with an investment banker, John Lambros.

The couple exchanges the vows on the 28th of February 1997. They are blessed with a son named Jack Lambros, born in the year 2003. Jack has once appeared on the cover of “Parents” magazine.

Who is Karen Duffy?

Karen Duffy is a model, actress, writer, and television personality from the United States.

She is best known for her book where she has shared her experience living with chronic pain.

Her father is a developer by profession whereas her mother is a homemaker. Talking about her education, she attended Park Ridge High School in Park Ridge, New Jersey from where she graduated in 1979.

She then earned a bachelor’s degree in recreational therapy from the University of Colorado Boulder.

Further, she holds an American nationality and belongs to mixed (Catholic and Irish) ethnicity.

Karen began her modeling career in the year 1989 and started appearing in television commercials. In the early 1990s, she worked as VJ for MTV under the name “Duff”.

She then made her film debut through the 1991 James Glickenhaus’s film, McBain as Crack Den Girl. That year, she also appeared in another film, 29th Street where she portrayed the role of Maria Rios.

In 1995, she started working as a correspondent for a documentary filmmaker, Michael Moore on television shows TV Nation and The Awful Truth.

Further, she hosted House of Tiny Terrors on TLC in 2006 and appeared on the Live Earth telecast on the Bravo Channel as co-host at Giants Stadium, New Jersey.

Lately, she guest-starred in an episode of reality television series, The Real Housewives of New York City.

She started writing after she was suffered from a disease, called neurosarcoidosis. In 2001, she published her first book, Model Patient: My Life as an Incurable Wise-Ass. The book was granted as the New York Times bestselling memoir.

She then published her second book, A Slob in the Kitchen in 2004 and her latest book,  Backbone: Living With Chronic Pain Without Turning Into One where she describes her ongoing incurable disease and constant pain.

Karen might have accumulated an impressive amount of wealth but hasn’t been available in the media.

Her salary, net worth, and other income are still under review.

Karen stays a mile away from the limelight of the media. She hasn’t been surrounded by any sorts of rumors and controversy that could hamper her personal and professional life.

The actress has a well-maintained body physique. She stands at the height of 5 feet 6 inches tall and her weight is about 57 kg.

Likely, she has a dark brown pair of eyes and as well dark brown short hair color.