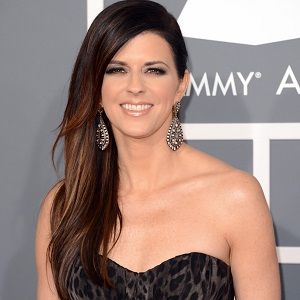 Karen Fairchild is a married woman. She tied the knot with her fellow band member Jimi Westbrook, on May 31, 2006.

Furthermore, the couple is also blessed with a beautiful son named Elijah Dylan Westbrook born in 2010.

Since their marriage, they have maintained a sound relation between them and doesn’t involve in any disputes. Apart from him, she has never seen anyone in the public and media.

Moreover, there are no rumors of extramarital affairs and divorce of her till date, Currently, they are living elegantly.

Who is Karen Fairchild?

Karen Fairchild is an American country singer. Furthermore, she is also the founder member of Little Big Town. She has found the band alongside Kimberly Schlapman, Phillip Sweet, and Jimi Westbrook in 1998.

Their debut album with Capitol Nashville named The Reason Why climbed at No 1 on the US Country charts.

In addition, their controversial song Girl Crush became a huge success and also won several awards such as Best Country Duo/Group Performance and Digital Song of the Year.

Karen was born on September 28, 1969, in Gary, Indiana, United States. She belongs to American nationality but her ethnicity is unknown.

Talking about her childhood and parents, there is not any information regarding his father and mother.

Concerning her education, she attended Samford University in Birmingham Alabama and completed her graduation.

Karen Fairchild began her career as a performer in the Christian vocal group named Truth. Later in 1998, she formed a band called Little Big Town alongside Kimberly Schlapman, Phillip Sweet, and Jimi Westbrook 1998.

The band launched their self-titled debut album in 2002 and at the 2014 CMA Awards. Moreover, the band released their debut album on the Monument Nashville label before moving to Equity Music Group.

Their debut album with Capitol Nashville named The Reason Why climbed at No 1 on the US Country charts.

Besides this, the band has also landed some of the big hit songs from their first album Little Big Town includes “Don’t Waste My Time” and “Everything Changes”. In 2006,  “Good as Gone” and “A Little More You” from their second album The Road to Here. Furthermore, “I’m with the Band” also peaked at number 32 on the country chart.

From their fifth studio album, Tornado,  “Pontoon” won the Grammy Award for Best Country Duo/Group Performance at the 55th Grammy Awards. In addition, Themselves and Girl Crush has won a couple of major awards.

So far, she has won more than half a dozen awards in her career with her band Little Big Town. She has received the Best Country Duo/Group Performance and Digital Song of the Year award for Girl Crush.

Furthermore, she has also grabbed Vocal Group of the Year, Top New Vocal Duo/Group, and a few more for ‘Themselves’.

How much is Karen Fairchild’s Net Worth and Salary?

Being a member of the famous country band, Karen earns a good amount of money from her profession. However, there is not any information regarding her net worth and awards.

Once, Karen Fairchild and her bandmate stuck in controversy for the lesbian theme song ‘Girl Crush’.

Furthermore, the co-host Alana Lynn at 104.3 FM in Boise, Idaho, also stopped playing the song after getting angry calls and emails about “promoting the gay agenda.” Apart from that, there are not any drastic rumors regarding her personal and professional life.

There is not any information regarding Karen Fairchild’s height and weight. Furthermore, she has light brown eyes and black hair.