Karen Florek is a married woman. She is married to Dann Florek. He is an American actor and director famous for his portrayal of New York City Police Captain Donald Cragen on NBC’s Law & Order and Law & Order: Special Victims Unit.

After dating for some years before exchanging wedding vows on 25 July 1983. As of 2020, they have been married for over 37 years. So far, the couple does not have any children. 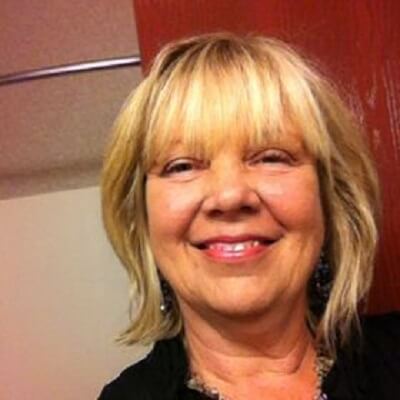 Who is Karen Florek?

Karen Florek is an American painter and photographer. She is better known as the wife of an American actor and director, Dann Florek.

Karen Florek was born in 1953 in Michigan, United States. As of 2021, her age is 68. There is very little information about her parents. Similarly, she has not revealed anything about her siblings and other family members.

She spent her childhood days in Michigan and her ethnicity is Caucasian.

Talking about her educational background, Karen went to Eastern Michigan University. From there, she graduated with a Major in Fine Art and a Minor in Speech Communication.

While she was living in New York City, she designed promotional material for theaters and also created in-house art programs for corporate employees. Moreover, she also created programs for after-school programs for children. Also, she worked as the Head of the Graphics Department for New York City’s Office of the Comptroller for which she received a design award and was nominated for Outstanding Women in Government.

In addition to being a painter, she is also a photographer, and her personal collection of contemporary photography by women was even featured in the exhibition called “Women Shooting Women” at the Roger Smith Hotel in New York City, New York.

Currently, Karen Florek covers events at The New School of Cooking in Culver City, California. She has her own blog called ‘In The Kitchen’ which combines original photos and writing and also gives a look inside the workings of a culinary academy with guest chefs and selected artisanal workshops in a full-time program.

However, she is best known as the wife of Dann Florek. He is an American actor and director famous for his portrayal of New York City Police Captain Donald Cragen on NBC’s Law & Order and Law & Order: Special Victims Unit.

As of 2021, Karen Florek has an estimated net worth in the region of $100k – $1 million. However, she has not revealed her annual salary.

Her husband, Dann Florek has an estimated net worth of over $10 million.

Karen has blonde hair and a pair of blue eyes. She has not revealed her height and weight. Similarly, there is no information about her body measurements for breasts, waist, and hips in addition to her bra size, shoe size, etc.

Florek seems to be inactive on social media sites. She has preferred to stay away from the social media world just like her husband.

You may also like to read more about the Bio, Career, Net Worth. Relationships, Social Media, and more about Jadon Sand, Jeffrey Reiner, David Steen, and more.