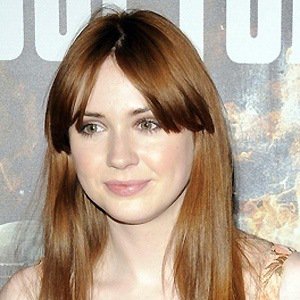 I went to Floridita on Wardour Street when I was 18. All I could afford was pumpkin soup and a glass of champagne, but it was worth it

I don't like modeling, but in terms of the places I got to visit, it was great

How do you create chemistry? If only I knew that! Some people say it's a natural thing that you have with someone, and maybe it is to do with that, but I think you can work on it.

Karen Gillan is an unmarried actress till now. She was previously in a relationship with British photographer Patrick Green. The couple began dating each other back in 2006. They were together for about six years and they broke up in 2012. After that, she began dating British producer Andrew Brooke in late 2012.

They broke up a few months later in 2013. There are no other records of her relationships. According to the records, she is possibly single at the present time.

Who is Karen Gillan?

Karen Gillan is a Scottish actress, model, and director. She is best known for playing the character Amy Pond in the British science-fiction television show Doctor Who (2010-2012). She won the 2012 National Television Award for her portrayal of Pond in Doctor Who. Gillan also starred in the romantic comedy Not Another Happy Ending in 2013 and played Nebula in the 2014 film Guardians of the Galaxy.

Karen was born on 28 November 1987, in Inverness, Scotland, UK. Her birth name is Karen Sheila Gillan. She is the only child of Marie Paterson and Raymond Gillan, a singer and recording artist.  When she turned 16, Gillan moved to Edinburgh and completed an HNC Acting and Performance course at Telford College. She moved to London at age 18 to study at the Italia Conti Academy of Theatre Arts drama school, where she earned a Bachelor of Arts in acting. She holds dual Scottish and British nationality and she is of Scottish ethnicity. While studying at Italia Conti, Gillan was scouted by a modeling agency.

Karen has been an active member in the industry since 2006. Her early television acting career included guest appearances on several drama series. Her first role is in an episode of series Rebus. After that, she became a cast member of the sketch comedy series The Kevin Bishop Show in 2008. She appeared on the show until 2009. She was cast for the role of Amy Pond in the British sci-fi series Doctor Who in May 2009. Karen played the role in the series from 2010 to 2012. She also made a cameo in the series in 2013. She won the “Woman of the Year” Awards- Best Actress in 2010 for her role in Doctor Who. In 2011, she won the SFX Awards, TV Choice Awards, and National Television Awards for her role in Doctor Who.

Gillan played Nebula in Guardians of the Galaxy in 2014 and reprised the role in Guardians of the Galaxy Vol. 2 in 2017. Gillan starred in the lead role in the supernatural horror movie Oculus as Kaylie Russell in 2013. In 2017, she directed her first feature film The Party’s Just Beginning. She is currently filming for Avengers: Infinity War and Untitled Avengers film. She has a net worth of 2 million dollars.

The famous and in-demand actress Danai Gurira-know on her upcoming projects and campaigns!