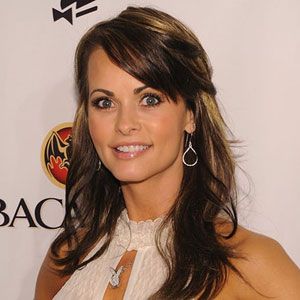 I have to admit I was completely smitten when the guy who delivers my bottled water said, "You have the face of an angel and the body of a goddess.": I'm more mature and less shy -- that happens when you pose nude -- but I've always put the feelings of others first. I'm just very nurturing and love to take care of people: It just so happened that I was in great shape, so they started using me in fitness magazines. I think it's great that at age 38 I'm capable of doing fitness stuff.

Karen McDougal is unmarried and still single. However, there were rumors surfaced about an affair with US President, Donald Trump back in 2006. Later, she clarified that she was in a romantic relationship with Trump for ten months from 2006 to 2007. She further hinted of in an intimate relation with Trump for many times in an interview with TV. However, all these alleged claims were denied by Whitehouse.

Later, she was seen with an actor Bruce Willis and that relationship was true or not that cannot be confirmed afterward.

Who is Karen McDougal?

Karen McDougal was born on March 23, 1971, in Merrillville, Indiana, US. Her mother, Carol McDougal raised her with three siblings brother Bob, Dave and Jeff and a younger sister, Tina. She is of Cherokee Indian and Irish descent and of American nationality.

At an early age as a child, she studied ballet and tap dance and dreamed of becoming Ballerina. Furthermore, she has done a major in Elementary Education from Ferris State University at Big Rapids before graduating from River Valley High School in 1989. During her school days, she was a cheerleader, color guard, volleyball and softball player.

Before her career as a model took off she used to teach at pre-kindergarten children in a Detroit suburb. She won local Venus Swimwear swimsuit competition in Michigan in 1997 which caught the eye of ‘Playboy’ photographer David Mecey. Later, she has appeared in Playboy magazine and became Playmate of the month for December 1997 and Playmate of the year in 1998. Furthermore, she became the first women to grace the cover of Men’s Fitness magazine in 1999 and went on to appear in many fitness magazines like Muscle and Fitness, Physical and  Iron Man.

Besides modeling, she has appeared in TV commercials of XFL Football league and has cameo roles in films like “Charlie’s Angels,” “Joe Dirt,” “Grind,” and “The Girl Next Door.”

This successful model has been living a luxurious life. She has an estimated net worth of $1 million.

According to the source, there were rumors she had an alleged affairs with Donald Trump for ten months back in 2006 before the presidential election but this rumor was denied through Whitehouse spokesperson. However, McDougal claimed that she was in an intimate relation with Trump many dozens of times during that period.

McDougal has stunning hourglass body with measurement of 36-24-35 inches. This 5 ft 8 inches tall beauty weighs around 58 kg. Furthermore, she has attractive blue eyes and blonde hair color. Her shoe size is 7.5 US and bra size is 34C.