Karen Yapoort is Tv host and model was crowned as Miss Amber in 2009.

Karen Yapoort is happily married to popular baseball player Edwin Encarnación. They got engaged in February 2017 before they got married. They finally exchanged vows on 26 November 2017 at the Casa de Campo Resort & Villas in the Dominican Republic.

The duo had a luxurious wedding ceremony which was attended by some of Edwin’s then-teammates, Carlos Santana, Roberto Perez, and Francisco Lindor and MLB players like Albert Pujols and David Ortiz was also among the attendee.

They together have one son Ever Encarnacion Yapoort who was born on January 31, 2019. 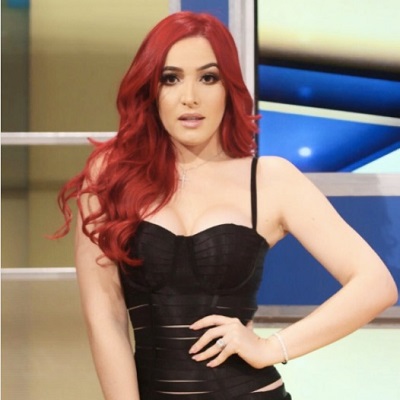 Karen Yapoort is Tv host and model who came into limelight after being crowned as Miss Amber in 2009. She was the first Dominican to do so. She is also well-known for being the wife of famous baseball player Edwin Encarnación.

She went to the Liceo Manuel Maria Balencia. Then she attended the Universidad Catolica de Santo Domingo where she completed her bachelor’s degree in Science in communications. She studied modeling at the Barbizon School. In 2007, she was the 2nd runner up in Miss Hawaii Tropic.

She started as a model and took part in different pageants. She was runner up in a local beauty pageant, the 2007 Miss Hawaiian Tropic. In 2012, she became Miss  Duarte and then participated in the Miss Dominican Republic beauty pageant where she was among the Top 15 contestants.

In addition, she currently worked as a host in the show De Extremo an Extremo. She also worked in different Tv series. She first appeared in Mas Roberti in 2010. She has also appeared in Vale Por Tres (2014), Super Papa (2017). She is also an owner of Yapoort Modeling Academy through which she has been earning a significant amount of money.

As of 2019, Karen’s net worth is around $1 million. Her husband  Edwin Encarnación earns a healthy amount of the salary from his baseball career. He currently earns  $20,000,000 as an annual salary from the contract with Cleveland Indians.

The couple lives a lavish and luxurious life. They the owner of some of the luxurious cars of recent times including MW, Bentley, Audi and many more which has a valuation over millions of dollars. Moreover, the duo has a luxurious house in Los Angeles which was bought for around $5 million.

There is no information regarding her body measurements. But she surely has a very beautiful and curvy body. She recently has given birth to a baby boy but she is already in good shape and flaunts her curvy body in photos through her social media accounts.