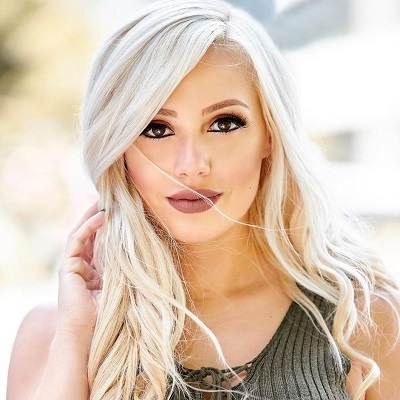 Kari Snow is currently single. To date, she has not introduced anybody as her partner.

In the show, Are You the One? she got paired with co-contestants; Max Gentile and Kylie Smith as partners. However, they are no longer together anymore.

Who is Kari Snow?

American Kari Snow is a TV Personality. Snow is renowned for her appearance in the 8th Season of MTV’s reality TV series, Are You the One?

Kari Snow was born in 1996 in East Hanover, New Jersey. She is of British-Germanic ethnicity.

To date, she has not shared any details on her family background including father, mother, and siblings. Also, details on her academics are behind the curtain.

Kari’s Journey in Are You the One?

She came into the spotlight when she featured MTV’s reality TV series, Are You the One? in the 8th season of the show. In the show, she made her appearance to find her true love.

To find love in the show, she got paired with the co-contestant, Kylie. Up to the 3rd week, she was paired with the same contestant. However, in the 4th week, she paired up with Kai. In the 5th Week, she proceeded to the Truth Booths with Kylie once more. As the result, they were confirmed that they were not a perfect match.

Following that, she chose other co-contestant like Danny, Paige, Remy, and Jenna as a pair. In the final week, she got paired with Max Gentile from Columbus, Ohio who turned out to be her match.

In the finale week, the entire co-stars won $750,000 in total as the winning amount.

The show turned herself into a TV celebrity. Following the show, she appeared in she participate in the reunion of the show hosted by AfterBuzz TV. In the reunion, she updated her relationship status that she and Max are no longer together.

In August 2020, she was crowned as the Miss New Jersey United States. She shared her picture wearing the crown on Instagram.

As of 2020, she has an estimated net worth of $20 Thousand. As a TV Personality, her earnings are in the range of $5ok or above.

She has won $750 thousand from the show along with the other cast members of the season.

She has brown eyes with blonde hair. She has a decent height and weight. However, details on her body stats are not available.

You may also read the bio, age, family, career, net worth, salary, and social media of Nicole TV, Tamera Young, and Mike Sorrentino.

Robyn Brown
Tags : American TV personality Are You the One?
Suggest Bio Update