Kari Wuhrer is an American actress and singer, who is well known for her time as a cast member on MTV's Remote Control. She is married to James Scura and has three kids. 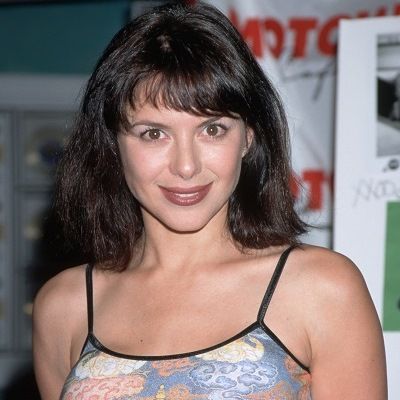 To allow people in the world to see me as I truly believe I see myself. I wanna create a character that's really memorable... like Julia Roberts did in Pretty Woman (1990). I haven't gotten to the essence of me... I have to be able to give up these insecurities.

It's either a freeing experience thing for me or it's some kind of insecurity thing where I really love my body and I honestly do think it's my biggest asset.

I'm the queen of the independent video!

What is the relationship of Kari Wuhrer?

Kari Wuhrer married Daniel Salim in 1995 but the union ended in divorce in 1999.

Who is Kari Wuhrer?

Kari Wuhrer is an American actress and singer, who is well known for her time as a cast member on MTV’s Remote Control.

She is also popular for her roles as Maggie Beckett in the television series Sliders and as Sheriff Samantha Parker in the horror-comedy film Eight Legged Freaks.

Kari Wuhrer was born in Brookfield, Connecticut, the United States on  April 28, 1967. Her birth name is Kari Samantha Wuhrer.

When she was a teenager, she had a punk rock band named Freudian Slip. She would often leave the house without telling her parents to perform in nightclubs. She has two brothers, Christopher and Scott, and one sister, Kim.

Talking about Kari’s education history, at the age of 13, she was admitted to Wooster School, where she studied acting.

She later attended New York University’s Tisch School of the Arts, Marymount Manhattan College, Columbia University, and the Royal Academy of Dramatic Arts as a student of drama.

Talking about her profession, she had her big-screen debut in ‘Fire with Fire’ (1986). She was then selected to serve as a VJ on MTV’s quiz show ‘Remote Control’ (1988).

Whereas, Wuhrer worked with Marc Singer in the adventure-fantasy ‘Beastmaster 2: Through the Portal of Time’ (1991), Jack Nicholson in the indie-drama ‘The Crossing Guard’ (1995), and Omar Hashim Epps and Kristy Swanson in the critically-acclaimed ‘Higher Learning’ (1995).

In the late 1990s, she collaborated with Joe Mantegna in the body-horror ‘Thinner’ (1996), Jennifer Lopez, Ice Cube, and Owen Wilson in the adventure-horror ‘Anaconda’ (1997), and David Schwimmer in the romantic-comedy ‘Kissing a Fool’ (1998).

Wuhrer portrayed Florida native Robin Farr in Fox’s short-lived drama series ‘Class of ‘96’. In the primetime drama series ‘Beverly Hills, 90210’, she appeared as Ariel Hunter in three episodes between 1994 and 1995. In the year 2006, she played Reese Marshall in ABC’s soap opera ‘General Hospital’.

Besides that, Wuhrer lent her voice to Maria Hill in the animated series ‘The Avengers: Earth’s Mightiest Heroes’ (2010-12).
She voiced another comic book character, Patricia “Patty” McCabe, in the web series ‘Vixen’. Her most recent appearance was in the 2018 crime-thriller film ‘Fiancé Killer’.

She released her first and only album to date, ‘Shiny’, through Del-Fi Records in1999. Moreover, Kari Wuhrer joined the cast of Fox’s (later Sci-Fi) science fiction and fantasy television series ‘Sliders’ in season three, portraying the character Captain Margaret Alison “Maggie” Beckett. Initially a guest star, she later became a member of the main cast as season three progressed.

Therefore, she starred opposite David Arquette in the 2002 horror-comedy ‘Eight Legged Freaks’. Since then, the film has achieved a cult classic status among horror fans.

Kari Wuhrer has a height of 5 feet 5 inches and a weight of 50Kg.

Also get to know more about the birth facts, education, career, net worth, rumors, height, and social media of different personalities like Drena De Niro, Ricky Martin, and Kristin Davis.