Karim Benzema is a French professional football player and he is currently playing as a striker.

Benzema is currently enjoying his relationship with Cora Gauthier since 2016. They are often seen together in public places. They have welcomed a son, Ibrahim on May 15, 2017. 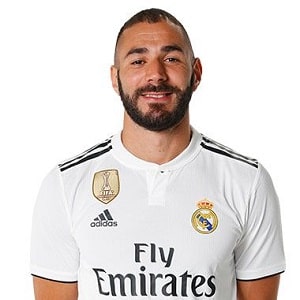 Who is Karim Benzema?

He started his career in football at the age of 9 from the French football club, Lyon. He has been awarded French Player of the Year thrice.

He was born on December 19, 1987, in Lyon, France. His birth name is Karim Mostafa Benzema and he has a birth sign, Sagittarius.

His father’s name is Hafid Benzema and his mother’s name is Wahida Djebbara. He was grown up in a small house in Bron and lived a modest lifestyle along with his eight siblings, and they are named Celia Benzema, Farid Benzema, Gressy Benzema, Laeticia Benzema, Lydia Benzema, Nafissa Benzema, Sabri Benzema, Sofia Benzema. He holds French citizenship and his ethnicity is Algerian.

He attended Olympique Lyonnais Academy. Other information regarding his education is not available.

After he was engaged in Lyon football club, he soon climbed up the youth categories. He scored 38 goals and he was observed by  The French domestic league ‘Championnat National des 16 ans’.

He debuted professionally on January 15, 2005, against FC Metz. His team won the match by 2-0. Then, he has signed a three-year contract with that team. He debuted championship league from the final group stage match of Lyon against Rosenborg on December 6. 2005. He scored for his club and won the game by 2-1. During the season, he played as the lead striker. He made his score 20 on the scoreboard and he helped the club to stay at the top of the table for that season. He extended his contract in that club till 2013.

Benzema was offered by the Spanish professional football club, Real Madrid. He signed a six-year contract on July 9, 2009. Benzema debuted in a pre-season friendly match with the Irish club, Shamrock Rovers, on July 20, 2009. He scored for the team and won by 1-0. Benzema scored two goals against the team, Rosenberg, and clinched a 4-0 win.

He debuted his league against Deportivo La Coruña on August 29, 2009. He netted his first goal in September 2009 over Xerez. Benzema debuted in the championship league from Real Madrid on September 30, 2009. He scored his first hat-trick in a match against Auxerre during the 2010-2011 season. Benzema was in the squad when his team scored a 1-0 win against Barcelona in the Copa del Rey final on April 20, 2011.

He scored the fastest goal in an El Clásico on December 10, 2011, in which he scored in just 21 seconds of the match. He won Copa del Rey for the second time where his team scored a 2-1 victory over Barcelona. Benzema signed a new five-year deal for Real Madrid on August 6, 2014. He was named ‘La Liga Player of the Month’ in October 2014. He made his contract extension on September 20, 2017, and he will remain in the club till 2021.

Benzema started to serve his national team from a young age and started from the Under-17 level. He was a part of his national team when his team defeated Spain by 2-1 on May 15, 2004, and won the ‘UEFA European Under-17 Championship’ in 2004. He played the 2010 World Cup, 2012 Euro Cup, and FIFA World Cup 2014 where he was successful in collecting various awards and rewards.

He has been awarded ‘French Player of the Year’ in the years 2011, 2012, and 2014. He was nominated for the Ballon d’Or award for the season 2017/2018. Benzema has won four times the Championship league, two times Spanish Cup, two times Spanish Super Cup, and many more.

Karim Benzema is playing for his country France. The Euro cup matches will take place in different countries which are listed below:

He has an estimated net worth of around $40 million and his main source of income is from his professional football career and also, he adds some amount through his endorsing deals like Adidas.

He was caught with an underage prostitute and he was dismissed from his national team of France.

He was arrested on November 4, 2015, for blackmailing French international footballer Mathieu Valbuena for “complicity in attempted blackmail.” Karim is found guilty and has been sentenced to 5 years in prison along with an $87,000 fine.

He has a height of 6 ft. 2 inches and he weighs 80 kg. He has dark brown colored hair and light brown eyes.