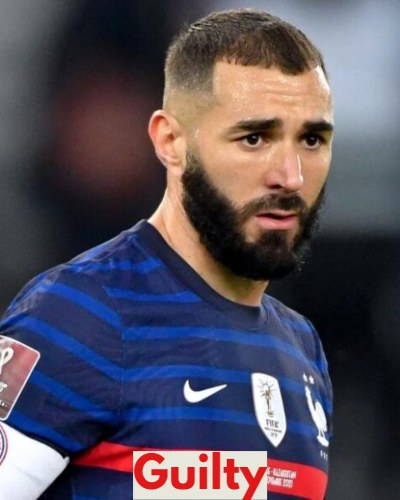 Karim Benzema has landed himself in big trouble! The France and Real Madrid striker Karim is proven guilty in the ongoing 2015 case of a sex tape.

On 24th November 2021, the French court gave Benzema a one-year suspended sentence for complicity in a bid to blackmail former player Mathieu Valbuena with a sex tape.

The guilty footballer is ordered to pay an $84,000 fine as he was one of the five people put on trial in October 2021 over the case of Valbuena. The judge said,

“Benzema was not aware of the precise manoeuvres but the content of his chat at Clairfontaine with Valbuena shows he was personally involved in the subterfuge.”

He has been denying the allegation put against him and his lawyers have announced their plan to put an appeal.

Also read Kevin Hart facing lawsuits for USD 60million for the sex tape! Sued by a model. Details inside

Karim Benzema and Mathieu Valbuena are former teammates who were at a French training camp. During the time Mathieu was blackmailed by unknown people with a sex tape. Karim is accused of putting pressure on Mathieu to pay off the blackmailers and acting as an intermediary between the parties.

He denied the allegations made against him and claimed he was there just to help his fellow player when he approached him at the training center. Karim suggested someone manage the whole video issue and no money was discussed. But Mathieu had something else to say about Karim.

After the conversation with Valbuena called his childhood friend Karim Zenati who is also found guilty. Valbuena claimed that the sex tape threatened his career and made him fearful all the time. Likewise, all the other people who were found guilty were handed various punishments from an 18-month suspended sentence to two and a half years in prison.

Also read What happened between Ojani Noa and his ex-wife Jennifer Lopez? Know about their Sex tape story

He started his career in football at the age of 9 from the French football club, Lyon. He has been awarded French Player of the Year three times. Read more bio…