Karin Winslow is openly lesbian. She is presently living a blissful conjugal life with director and writer, Lana Wachowski.

The beautiful couple first met at the club The Dungeon, LA. In 20009, the pair tied the wedding knot after dating for over a year.

Earlier, she was married to a guy named Jake Miller or commonly known as Buck Angel. In 1998, they exchange vows but unfortunately, their marriage ended with divorced in 2001. 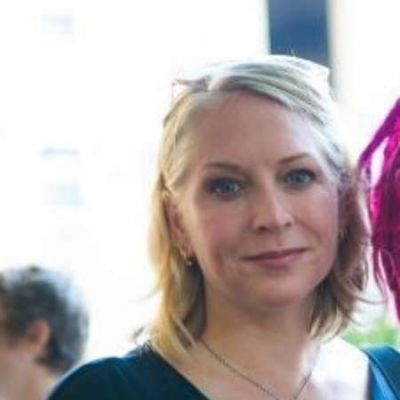 Who is Karin Winslow?

Karin Winslow is recognized as an actress and celebrity partner. She is best known as the spouse of writer and director Lana Wachowski.

Karin was born on the 15th of December 1967, in Connecticut, United States. Her full name is Karin Ingrid Winslow.

Karin keeps a low-key profile when it comes to her personal life. Her parents’ and siblings’ identity hasn’t been revealed in the media. Also, her academic background is under the curtains.

Further, She holds American citizenship and belongs to the Caucasian ethnicity.

In 2006, Karin made her debut in Hollywood through Ward Boult’s short video, Demon Familiars alongside Angel Heart and Brinke Stevens. She then appeared in the 2015 Netflix TV series, Sense8.

In the series, the lead casts include, Ami Ameen, Doona Bae, Jamie Clayton, Max Riemelt, Brian J. Smith, Miguel Angel Silvestre, and more. She is also a member of the Chicago House and Social Service Agency.

Talking about her partner’s professional life, Lana is a successful director, writer, and as well producer. She has directed the hit movies such as The Matrix (1999), Cloud Atlas (2012), Speed Racer, Bound, Sense8, and more.

Similarly, her writing credits include V for Vendetta, Assassin, Jupiter Ascending, and more.

Karin stays miles away from the spotlight of the media. To date, she hasn’t been part of any sorts of rumors and controversial matters that create headlines in the media.

The actress might have accumulated a decent amount of wealth from her profession. However, she hasn’t yet disclosed her precise net worth, salary, and other earnings in the media.

Talking about her partner’s income, Lana has an estimated net worth of around $125 million as of 2021.

The actress stands at the height of 5 feet 9 inches tall and her weight is about 60 kg. Likewise, she has a blue pair of eyes and blonde hair color.

Her other body measurement isn’t available in the media.