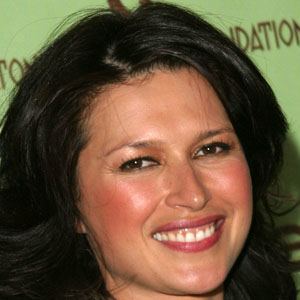 I don't wear perfume, and I rarely wear jewelry.

Karina Lombard is currently single. She was previously married to Anthony Crane in 1991 after dating some years. However, the couple could not hold the relationship and end with divorce in 1998. The couple did not welcome any child during that period. After that, she has not been linked with any other person.

Who is Karina Lombard?

Karina Lombard is a French-American actress, singer, screenwriter, and director who is best known for her performances in ‘The L Word’, ‘The 4400’, ‘Rescue Me’ and ‘Legends of the Fall’.

She was born on January 21, 1969, in Tahiti, French Polynesia, France. She is currently 50 years old. Her father’s name is Henry Lombard and her mother’s name is Nupuree Lightfoot. Her mother is a Lakota member and medicine woman.

Lombard’s father is of Swiss-Russian and Italian descent. She spent her childhood all over Europe however, most of her education was done from Switzerland with her father and four older siblings(Helen, Ines, Charles, and Denise). Spanish was her first language and later learned English, Italian, French, and German.

She saw her first film ‘Donkey Skin’ at the age of eight and after that, she knew that is what she wanted to do.

She holds American and French citizenship and her ethnicity is a mix of Russian, Italian, Swiss, and Lakota Native Amerian.

Talking about her education, she was educated in some of the finest schools and attended multiple Swiss boarding schools. Also, she studied acting at the Lee Strasberg Theater Institute and the Actors Studio in New York City

She debuted her film career from the role of Warhol Actress in ‘The Doors’ in 1991. After two years, she made her appearance as Antoinette Cosway in ‘Wide Sargasso Sea’ and as Girl on Beach on ‘The Firm’.

She started appearing in television since 1987 from the role of Ivoa in ‘L’île’ in 1987. After a year, she made her appearance as Sammia Watts in ‘Early Edition’ and as Anna Temaru in ‘The Violent Earth’.

In addition, she also appeared in a Calvin Klein photo shoot with a Native American theme and her photographs was appeared in ‘Elle’ and ‘Vogue’.

It seems she likes to keep her profile low and hence, she has not been involved in any types of armor and controversies in her career.

She has got a cute look and a dazzling smile. She has a height of 5 ft. 9 inches and weighs 57 kg. Karina has dark brown eyes and dark brown hair. Her body measurement 33-24-34 inches.