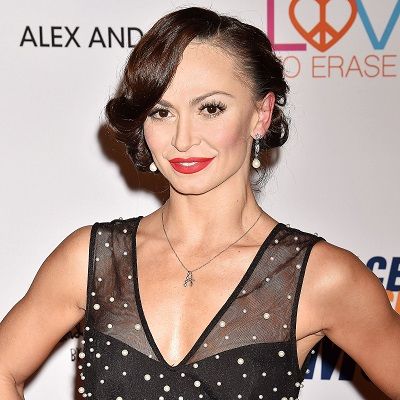 We were together in Canada only once to film the club scene. Otherwise either Slavik or I would fly to Canada when we had to film our scenes and then fly back to Asia to continue working. It was a lot of extra flying time - which was difficult and tiring - but we were so happy to work on such a big project movie.

Richard was very hardworking. He would spend a whole day dancing and would never complain. And I can assure you that I made sure he had sore muscles.

It was incredibly exciting and we would definitely love to work like this again.

Karina Smirnoff is currently engaged to Jason Adelman. Jason is an entrepreneur and they engaged in January 2015.

On 11th March 2015, they announced their split and called off their engagement. As of 18th December 2019, she announced that she is expecting her first child.

Previously in 2009, Karina was engaged to fellow DWTS pro and Ukrainian Maksim Chmerkovskiy for nine months in the tear 2009.

After that, in October 2009, she began dating Major League Baseball pitcher Brad Penny. In October 2010 they engaged and called off their engagement in December 2011.

Who is Karina Smirnoff?

Similarly, she is a five-time U.S. National Champion.

She is working on post-production Tango Shalom as Viviana Nieves.

Karina Smirnoff was born on 2nd January 1978 in Kharkiv, Ukrainian SSR, Soviet Union. Her parents were the owner of a liquor store in Staten Island.

Similarly, she graduated from Bronx High School of Science in The Bronx and New York City’s Fordham University in New York with a double major in economics and information system programming.

Karina started dancing by competing with Roman Nabatov as an amateur couple for the USA and in January 1997, they ended their partnership.

After that, she started dancing with Paul Killick in October 1998 as a professional couple for England and their partnership ended in July 1999.

In 2004, Karina appeared in 2004 film Shall We Dance? as a dance instructor and was Stanley Tucci‘s dance partner.

Similarly, her last professional partner recorded in competitions was Dmitri Timokhin representing Russia in October 2005. She was the project/director of a dancing event Day & Night which is held on 18th November 2006 at the Hollywood & Highlands Grand Ballroom.

Likewise, in November 2016, she has announced the cast of E! reality series Famously Single for its second season.

Karina was a performer on the third season of the ABC series Dancing with the Stars with Mario Lopez. Similarly, they finished in second place and lost to Emmitt Smith and Cheryl Burke.

On 19th March 2007, she returned to the show for season 4 and partnered with Billy Ray Cyrus. Likewise, she appeared on the thirteenth season of Dancing with the Stars with J.R. Martinez.

On the 22nd season, she partnered with formal NFL quarterback Doug Flutie but got eliminated in week 6.

She earns around $5000 US per week on Dancing with the Stars. She has a house in Woodland Hills, California, US. Likewise, she bought the home in January 2013.

Karina is a brown-eyed-brunette. She is 5 feet 4 inches tall and weighs around 55 kg.

You may also read the age, parents, career, net worth, body measurement and social media of Hilde Osland, Shirley Ballas, and Brendan Cole

Former ‘Dancing With The Stars’ Karina Smirnoff Is Pregnant With Her First Baby!