Who is the wife of Karine Jean Pierre?

American gay activist, Karine Jean Pierre is happily married to her wife, Suzanne Malveaux. Suzanne Malveaux is a CNN correspondent. They are parents of an adopted daughter named Soleil Malveaux Jean-Pierre, together.

There are no pictures of their wedding or info on how and when they started seeing each other. 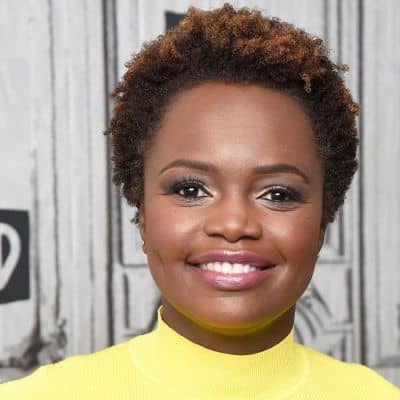 Who is Karine Jean Pierre?

Previously, she had been the senior advisor and national spokeswoman serving for MoveOn.org and political analyst MSNB and NBC News.

Karine Jean Pierre was born in Fort-de-France, Martinique, France on August 13, 1977. Karine is 45 years old as of 2022 whereas she has a birth zodiac sign of Leo according to the astrological chart.

She was born to her Haitian parents who later moved to America and raised her in Queens Village, New York City while she was 5 years old. That’s why she possesses American nationality and mixed ethnicity. She is the eldest daughter of her anonymous parents among her three siblings. Her father was a taxi driver by profession while her mother used to serve as a home health aide.

Belonging to a middle-class family, where her parents needed to work, she was given the responsibility to take care of her younger siblings.

Heading toward the educational background of Jean Pierre she graduated from the New York Institute of Technology. Later in 2003, she earned her MPA degree from the School of International and Public Affairs, Columbia University (SIPA).

After graduation, she started serving New York City councilor James F.Gennaro as the director of legislative and budget affairs. She then worked as the outreach coordinator working for Walmart Watch, based in Washington, D.C. IN 2006. Similarly, in 2008 she had been the southeast regional political director for John Edward’s presidential campaign.

During President Obama’s 2012 re-election campaign she was the National Deputy Battleground States Director. Then in Martin O’Malley’s 2016 presidential campaign, she had been the deputy campaign manager.

In April 2016, she had been the senior advisor and national spokeswoman serving for MoveOn.org and political analyst MSNB, and NBC News. She acted as a negotiator between then-presidential candidate Kamala Harris and protestors who raised their voice in favor of, an animal-rights activist who directly rushed onto the stage to seize her microphone.

Also in Joe Biden‘s 2020 presidential campaign, she had been the senior advisor. In May 2020, she became a member of the Biden team and in August 2020, she was announced to be the Chief of Staff for Biden’s vice presidential nominee.

The Biden-Harris transition team publically announced that Jean-Pierre had been enlisted to be the Principal Deputy Press Secretary on November 29, 2020. She shows her pride for being the first gay and first Black woman while giving the first White House press briefing on May 26, 2021. In 2021, she had been enlisted on Fast Company’s Queer 50 list.

As an author, she published her first book titled, ‘Moving Forward in 2019.

On May 13, 2022, Karine Jean Pierre was appointed as the 35th White House Press secretary.

As per Daily New Catcher, 2022 White House Press Secretary, flaunts a massive net worth of more than 1 million USD.

Karine Jean Pierre’s net worth is taking growth in recent years including her Harris VP candidacy campaign and the deputy press secretary service.

At the moment, the yearly/monthly salary she is charged is not available. But she will be earning more than 3/4th value of a hundred thousand mark from her press secretary duties for the White House.

Karine Jean Pierre is in the limelight after being the first openly gay woman, and the second Black woman, to lead a briefing.

Besides this, Jean Pierre has not been involved in any serious rumors and controversies.

Karine Jean Pierre has a slim body standing at the height of 5 feet 7 inches and weighs around 55 Kg. Additionally, she has a body measurement of 34-25-35 inches which means her bust size is 34 inches, waist size is 25 inches and hips size is 35 inches.

In addition, she is openly gay and has a dark complexion. Jean Pierre has a couple of black eyes and brown hair.

Regarding the social media presence of Karine Jean Pierre, She is active on Instagram under the username, @k_jeanpierre having more than 189K followers. She is available on Twitter where over 187.6K people follow her.

Likewise, there is also a Facebook page under her name, garnering around 62K followers which might have been created by her fans.