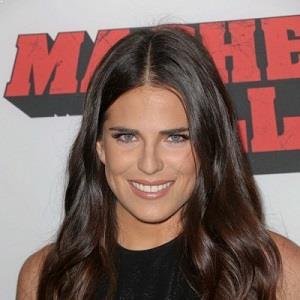 I've done about 15 movies and four television series in Mexico. My last two movies were the highest grossing in Mexican-cinema history - 'Nosotros los Nobles' and 'Instructions Not Included

I'm a wannabe redhead, definitely wannabe Julianne Moore or Jessica Chastain redhead. But I love being a brunette.

Karla Souza is a married woman since 2014. She is married to Marshall Trenkmann. The couple dated each other for a few years and got engaged in December 2013. The couple married in California in May 2014. They don’t have any children till now. Karla and Marshall have been married for over three years now and their relationship is going very well.

Prior to her marriage, she was in a relationship with Mexican actor Gonzalo Garcia Vivanco from 2009 to 2010.

Who is Karla Souza?

Karla Souza is a Mexican-American actress. She is widely popular for the portrayal of Laurel Castillo on the ABC legal drama series, How to Get Away with Murder since 2014. She is also famous for playing Bárbara Noble in the 2013 Mexican dark comedy film, Nosotros Los Nobles and Roxana Robledo in Suave Patria (2012).

Karla Souza was born in 1986, in Mexico City, Distrito Federal, Mexico. Her birth name is Karla Olivares Souza. She is the daughter of Mexican mother Mónica Souza. Her father was a Chilean. She spent her childhood and early life in Aspen, Colorado. She holds dual Mexican and American nationality and belongs to Mexican and Chilean ethnicity.

Karla began her career as a contestant in the French reality TV show Star Academy. At the age of 22, she returned to Mexico to pursue her career in acting in television and film. After that, she made her acting debut in the Mexican TV film Terminales (2008).

The following year, she appeared on the Mexican TV series Verano de amor. She rose to fame in 2013 when she starred in two hit Mexican movies Nosotros Los Nobles and Instructions Not Included. For her role in Nosotros Los Nobles, she won Pantalla de Cristal Film Festival Award for Best Actress. In addition, she also won the Diosas de Plata for Best Performance – Actress for the same movie.

Karla has starred in several other Mexican and American movies including Instructions Not Included, El Crimen del Cácaro Gumaro, Sundown, and Everybody Loves Somebody. In 2011, she starred as Lucia in the 2011 TV film Niño Santo.

She began playing the character Laurel Castillo in How to Get Away with Murder in 2014. For her role in the series, she won the 2017 Impact Award for Outstanding Performance in a Television Series. Her salary and net worth are unknown to the media.

Currently, there are no any rumors regarding her personal life and professional career. She has been a straight person in her life and has never been a part of any controversial issue.

Jack Falahee
Tags : abc Actress How to Get Away with Murder Nosotros los Nobles Suave patria