Singer Karol G is having an affair with an award-winning musician J Balvin.

Karol G was previously in a relationship with fellow Colombian musician J Balvin.

Currently, she is dating Puerto Rican rapper Emmanuel Gazmey Santiago commonly known as Anuel AA. The pair have been spotted together on several occasions. 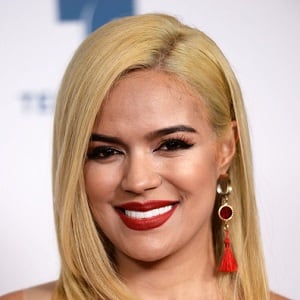 Who is Karol G?

Karol G is a Latin Grammy Award-winning Colombian reggaeton singer and songwriter. She has released several popular singles to date including ‘Ahora Me Llama’, ‘Culpables’, and ‘Mi Cama.’

Karol was born in Medellín, Colombia as Carolina Giraldo Navarro on February 14, 1991. As of 2021, she is 30 years old. She has a sister named Jessica. Karol became interested in the world of music at an early age.

She is of Colombian nationality. Furthermore, there is no detailed information available about her ethnic background, father, and mother at present.

Talking about her education, Karol attended Calasanz School, Colegio Calasanz Medellín. In addition, she also attended the University of Antioquia.

She initially participated in the talent show ‘The X Factor.’ She began using her stage name Karol G in 2006. She garnered widespread fame after her collaboration with Puerto Rican singer Nicky Jam for the song ‘Amor De Dos.’

Additionally, in 2014, she collaborated with fellow Colombian Latin trap singer Andy Rivera and they released the song ‘Mañana.’ Since then, she has released several other popular singles.

Karol has not revealed her current salary. However, she has an estimated net worth of around $8 million at present.

Karol became part of a controversy after her song Ahora Me Llama’s lyrics were deemed unconventional and controversial. At present, there are no rumors concerning Karol and her career.

Furthermore, her natural hair color is dark brown and her eye color is also dark brown. Presently, she has dyed her hair blue. Her body measurements are 33-24-35 inches.

Additionally, she has over 41.8M followers on Instagram. Similarly, her Facebook page has more than 25M followers.