American model and actress. She is mostly known for her relationship with famous singer Chris Brown in 2010. 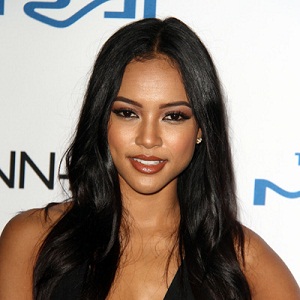 I'm not the perfect person. I'm not the most happy person. I get angry, and I get mad sometimes, but I try my best to control my thoughts. Because that flows throughout your body

First and foremost, it's important to love yourself

I hit a brick wall one day, and I spent a lot of time by myself learning about me and who I am and what I want and don't want.

Who is Karrueche Tran?

Karrueche Tran is an American model and actress. She is mostly known for her relationship with famous singer Chris Brown in 2010.

Born in Los Angeles, California, on May 17, 1988. His nationality is American and his ethnicity is mixed(Vietnamese and Jamaican).

Tran was the daughter of a Vietnamese mother, Cindy Adamson, and a Jamaican father, DeVon Minters. She has a brother named Raymond Adamson.

Tran was enrolled at Fairfax High School. Her family later moved to San Fernando Valley and hence Tran had to change her school. She studied at Birmingham High School and graduated from there in 2006.  She was again enrolled in Pierce College from where she graduated in 2008 with a degree in Graphic Design.

She initially worked at Nordstrom where she began her career as a personal shopper. She later worked as a freelance celebrity stylist in Hollywood. She was the face of Lady Crooks for the Summer 2013 collection. She was also featured on a French-based athletic brand ‘Le Coq Sportif’ in their Spring/Summer 2015 lookbook.

Tran has appeared on the cover of numerous magazines including ‘Rolling Out’, ‘Ouch Magazine’, ‘The Hundreds’, ‘Bleu Magazine’, ‘Annex Magazine’, and ‘Cliché Magazine’ among others.

She portrays the role of Vivian Johnson in ‘The Bay the Series’. She has also been part of ‘The Fright Nite Files’ and ‘3 Headed Shark Attack’. Tran is also recognized for her portrayal of Vanessa Ivy on ‘Vanity’, a fashion web series. She hosted numerous programs during the BET Awards in 2014. She is also a part of the Wilhelmina Models LA.

She has had 14 credits as an actress for various movies and television series in her career. Some of the movies, television series, and videos that she has been part of include ‘The Bay’, ‘Welcome to Willits’, ‘Only for One Night’, ‘Relationship Status’, ‘The Nice Guys, ‘A Weekend with the Family’, ‘Truth Be Told, ‘PrXde’, ‘Single Ladies, ‘The Dead Diaries’, ‘The Fright Night Files’ and others.

She also has 1 credit as a producer for the TV series ‘The Bay’. Tran has had 3 wins and 1 nomination in various categories during her career. She has won Daytime Emmy Award, HollyWeb Festival Award, and other numerous awards.

Karrueche Tran: Salary and Net Worth

Tran was rumored to be dating Game, an American rapper around 2015. She was also rumored to have had a relationship with Ray J who is an American singer in November of 2014.

She was also rumored to be dating Travis Scott. There was also a rumor that Tran might be getting back together with Chris Brown which later turned out to be false.

She was also rumored to be dating NyleDiMarco for some time. She has also been part of various controversies time and again for the controversial picture she posts on social media.

Karrueche has a height of 5 feet 1 inch. Her body weighs 52kg. She has black hair and black eyes. Furthermore, her body measurements are 33-24-35 inches. Besides these, her bra size is 32A, the dress size is 6US and the shoe size is 7US.

Also know more about the early life, career, net worth, relationships, and controversies of other models and actresses including Amanda Righetti, Nazanin Mandi, Willa Holland, Pamela Anderson, and Hande Ercel.

Karrueche Tran and Quavo are dating but actually are not the couple. Continue reading to know about their relationship affair!!!