Updated On January 4, 2023 | Published By: Neil Richard
Share this
In Relation 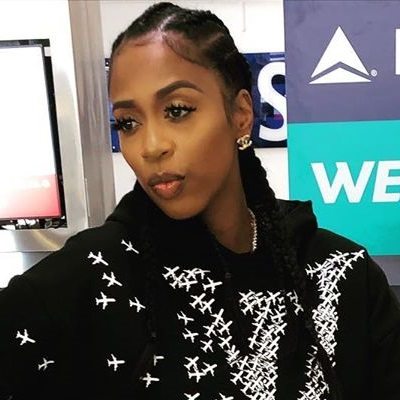 Kash Doll and Tracy T are the parents of a baby boy!!

Kash Doll is currently in a relationship with Tracy T, a Musician.

There is no information regarding their love life or when they started dating each other.

Furthermore, Kash announced on September 2021, that she was expecting her first child. Their first child, a son was born on January 6, 2022.

She is linked with an Entrepreneur named Eric. He is from South Africa.

Previously, she was in a relationship with a guy that broke up with her over a picture where the rapper Drake was hugging her at a party.

Before that, she hooked up with the rapper, Big Sean for a very small time interval.

Prior to that, Doll was in a relationship with the rapper, Dex Osama before coming into the industry.

Also, he happens to be one of the few who inspired her to be a rapper.

However, they parted ways with each other. Later, in 2015, Dex was killed at a nightclub being shut.

Who is Kash Doll?

Kash Doll is a rapper. She is renowned for her singles For Everybody and Ices Me Out.

Currently, she is signed with the Republic Reports.

Kash Doll was born Arkeisha Antoinette Knight on the 14th of March 1992 in Detroit, Michigan. She is of All-American ethnicity.

To date, she has not named his mother and father. Talking about childhood, she faced some tough days during her childhood.

Her father passed away when she was just one year old. Later, her mother got remarried.

However, her mother and stepfather never had good terms which caused constant arguments between them.

Being the eldest among her five siblings, she also had to bear some of the financial burdens of the family.

For that, she took various odd jobs since her younger days.

In between such works, she still found little time for herself where she discovered her passion for freestyle and writing lyrics.

Talking about her education, she attended Henry Ford college to study business management. However, she left college to support his family.

After that, she started her career as a dancer in the adult entertainment industry.

Soon, she started working as a rapper for nightclub patrons.

Also, she started performing in events, local clubs, and school programs too.

Identifying her talent as a rapper, Kash Doll wanted to explore more in the sector.

Later, she also signed a deal with a local recording house that came to fail.

Later, she started posting her rap video on social media including Instagram.

Eventually, some of her videos reached the rapper, Drake who was invited to perform with him on the Summer Sixteen tour.

In 2015, she dropped her first single, Run Me My Money which went viral and became the first milestone in her career.

Moving forwards, on the 16th of July 2018, she launched the EP, The Vault which consists of the song, For Everbody.

Later, in 2019, she released her debut album, Stacked under the recording label Republic including the tracks like Ice Me Out, Kitten, and Ready Set.

The same year, she also featured Iggy Azalea’s single, Fuck it Up.

As a rapper, she makes in the range of $62k on average.

Besides that, the royalties of her songs and music concerts are also a major source of her income.

In the meme, she shared two pictures with the Caption, At the airport.

In the first picture, she is wearing a mask.

Whereas the second picture consists of several Disney princesses wearing masks except for the MULAN.

Also, the photo contains the text, Sorry MULAN but you never know.

However, the racist meme post didn’t go well with the social media user, and started backlashing her.

She stands at a height of 5 feet 4 inches and weighs around 65 kg.

She also has a self-titled YouTube channel with more than 526k subscribers.