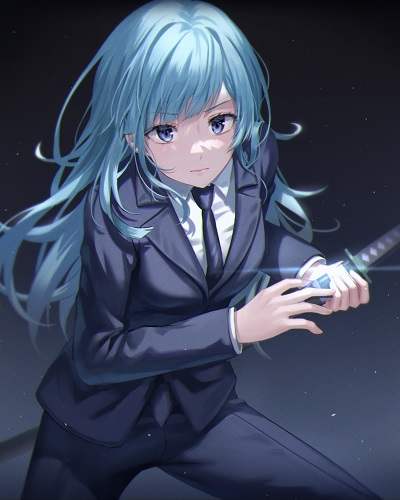 Who is Kasumi Miwa?

Kasumi Miwa is a supporting character of the Japanese anime and manga series, Jujutsu Kaisen. Miwa is a student at the Kyoto Jujutsu High School.

She is currently in high school as a second-year student and ranked as the grade three sorcerer. Also, she is renowned for her New Shadow Style sword technique.

Know the Voice behind Kasumi Miwa

The Japanese voice for the character is provided by the Japanese Voice artist, Chinatsu Akasaki. Akasaki is from the Kagoshima Prefecture of Japan.

The Nippon Cultural Broadcasting Award winner, Akasaki is popular for the anime series including Accel World, Nana to Karou and Fruit Basket.  Currently, she is with the voice talent management firm, 81 Produce as one of their stars.

The English dubbed voice is provided by the voice actress, AllegraClark. The voice actress has been associated with famous anime series including Dragon Age: Inquisition, Fire Emblem: Three Houses, and Bloodhound as Apex Legends.

Last, in 2020, she featured the video game, Medal of Honor: Above and Beyond.

Kasumi Miwa was born on 4th April in Tokyo in a lower-middle-class family. Currently, she is 17 years old. While talking about her family, she has a father and mother whose names were never mentioned in the series.

Also, she is the eldest among his two brothers. During her childhood, she was athletic in nature. She used to represent her youth basketball team as the captain.

When she joined the junior high, she met her mentor who trained her to be a jujutsu sorcerer. To remove the burden of her mother, she trained as a swordswoman.

Unlike other characters in the series, she has a love interest in the anime series, Jujutsu. Her love character in the series happens to be Kokichi Muta. Muta is also a student at the Kyoto Jujutsu high famous for using the Ultimate Mechamaru.

However, their relationship doesn’t end on a happy note. When Kokichi left Miwa, Miwa begged her not to leave her. At this point, Muta confessed his love saying that he truly loves her and wants her to be happy at all costs and find her happiness.

Swordswoman- She is an expert swordswoman and wields the Katana as her main weapon during her battle. She started to learn using for swords during high school. Also, she is able to incorporate jujutsu with her sword technique.

New Shadow Style- She has a special barrier technique, New Shadow Style. Using this technique, she is able to create a circle with a radius of 2.21 m around her. Anybody who enters the barrier, they are instantly intercepted by her swords.

She has navy blue with blue hair. Miwa has a height of 5 feet and 4 inches and has a decent weight. Similar to another curse user, she wears black suits and pants. Also, she wields her swords.