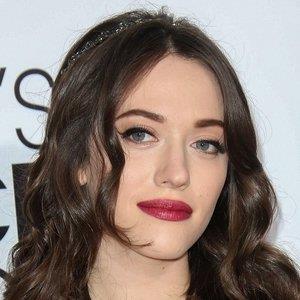 There's nothing else I would rather do, unless there was a profession that involved cuddling bunny rabbits and kittens all day for money.

I don't take crap from anyone, so that makes people think I'm rebellious. I'm not. I'm just not a pushover.

I basically grew up in the woods. There were deer on my lawn. It was totally awesome. That's why I'm so socially weird.

I can say that I had a particularly painful teenage-hood. I felt pretty alienated most of the time because I wanted to become an actress from an early age and was made fun of relentlessly.

I can't imagine wanting to be famous just for the sake of being famous. I think fame should come along with success, talent.

Kat also dated Canadian Singer Drake during 2013. Furthermore, from 11th October 2014 to July 2016, she dated American Musician Josh Groban. Josh Groban and Kat made their first public appearance in 2014 at the Beverly Hills Carousel of Hope Ball. Currently, she is believed to be single and she does not have children from any of her relationships.

Who is Kat Dennings?

Kat Dennings is an American actress. She made her acting debut in an episode of the HBO dramedy series ‘Sex and the City’. Additionally, she starred alongside Beth Behrs in the CBS sitcom ‘2 Broke Girls’.

Her mother is a poet and speech therapist while her father is a molecular pharmacologist, and college professor and chairman and she is the youngest of five children, including an older brother, Geoffrey S. Litwack.

She always wanted to pursue her career in acting since her childhood years. She is of American nationality. Furthermore, she belongs to Ashkenazi Jewish ethnic background. Talking about her education, Kat was homeschooled.

Later, she was attended Friends’ Central School. Eventually, she graduated from high school early, at the age of 14.

Career, Salary, Net Worth, and Awards

Kat began her career in commercials at the age of 10. She initially appeared on an ad for potato chips. After appearing in HBO’s ‘Sex and the City’, she starred on the short-lived WB sitcom ‘Raising Dad’ from 2001 to 2002 as Sarah.

Additionally, she continued working on television and guest-starring on ‘Without a Trace’.

All in all, Kat has more than 30 credits as an actress. She has appeared in several movies and television series like ‘The Simpsons’, ‘Big Mouth’, ‘Drunk History’, ‘Hollywood Adventures’, ‘The Newsroom’, ‘Suburban Gothic’, ‘Thor: The Dark World’, ‘To Write Love on Her Arms’, ‘American Dad!’, ‘Daydream Nation’, ‘The Answer Man’, ‘Big Momma’s House 2’, ‘CSI: NY’, ‘The 40-Year-Old Virgin’ and ‘Without a Trace’ among others. Additionally, she appeared in a music video for the Hanson single ‘Get the Girl Back’.

Kat has not revealed her current salary. However, she has an estimated net worth of around $ 8 million.

Kat came to the news after she defended the controversial content of ‘2 Broke Girls’. Furthermore, she also became part of another controversy after she slammed Justin Bieber’s Instagram saying “He’s Too Young To Be Posting Shirtless Pictures”. Currently, there are no rumors concerning Kat and her career.

High-Profile Relationship Of Matthew Gray Gubler Over The Years; Who Is He Dating In 2020?