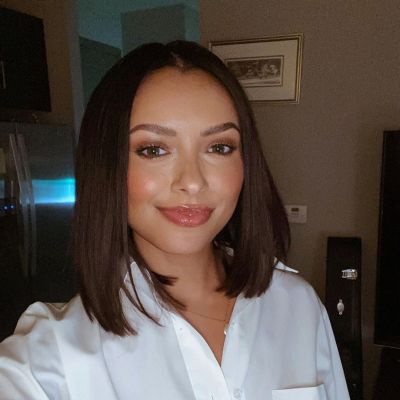 Talking about her love life, Kat Graham is in a love relationship with Darren Genet is a well-named American cinematographer and television director who is known for his work on CSI: Miami, Good Girls, The Vampire Diaries, and so on. Kat has shared their photos on her Instagram followed by the caption: Happy Valentines Day Lovey.

They have started sharing photos and relationship news since Nov. 2019. Nevertheless, the couple has not shared their relationship details in the public till now.

Previously, she was in a love affair with Cottrell Guidry. Guidry is a named American actor, writer, model, director. They started dating each other in 2008 and later engaged on 28 October 2012.

However, the former couple split up on 12 December 2014 without any unclosed reasons.

Who is Kat Graham?

Kat Graham is a well-recognized Swiss American actress, singer, dancer, and model. Graham is widely famed for her role as Bonnie Bennet on The CW supernatural drama series, The Vampire Diaries(2009-2017).

Kat Graham was born on 5 September 1989. At present, her age is 31 years old. Likewise, her birthplace is Geneva, Switzerland.

Kat is the daughter of her father, Joseph Graham whereas her mother is Natasha Graham. Moreover, she has a brother as well named Yakov. Her parents got divorced when she was just five years old.

Talking about her nationality, Graham holds a Swiss and American identity whereas her ethnicity is mixed(Americo-Liberian, Jewish).

Regarding education, the actress took her early education from Hebrew School and she was brought up in her mother’s Jewish religion.

Professionally, Kat is a multi-talented superstar. She began her career in the acting industry as a six-year-old child actress. The actress has emerged in many commercials for brands like K-Mart, Pop-Tarts, and Barbie. With her appearance in commercials, Graham got the attention of famous choreographer Fatima Robinson.

Further, Kat got recognition and performed in various dance videos for stars like Missy Elliott, Pharrel, Jamie Foxx, and so on. She started her television profession portraying the role in the Disney Sitcom, Lizzie McGuire. Moreover, the actress has featured in some series like Strong Medicine(2003), Malcolm in the Middle(2003), Grounded for Life(2004), CSI: Crime Scene Investigation(2006).

Her career highlighting appearance was in The CS supernatural drama portraying the role of Bonnie Bennett in, The Vampire Diaries. It started in 2009 and it was Kat’s biggest performance of her career.

The prominent start has performed a lot of singles such as Cold Hearted Snake, Put Your Grafitti on Me, All Your Love, My Boyfriends’ Back, and Sassy.

A well-celebrated multi-talented personality, Graham has earned a handsome amount of money from her multiple profession. She has been active in her profession from the year 1998 till the present.

It is reported that Kat Graham has an estimated net worth of $3 million.

Kat has never been part of any controversial matter or rumors till now. The actress has been preoccupied with her professional and private life.

It seems that Graham prefers enjoying her personal life and does not want to merge it with her professional life.

31 years old star, Kat Graham has gorgeous looks, perfect body shapes, and an admirable personality. She stands at a height of 5 feet 2 inches. Also, he has a balanced bodyweight of 56 kg.

Furthermore, Graham has dark brown eyes as well as her hair is dark brown.

Regarding her social media presence, Kat Graham is an active personality on social media. Kat has more than 6.5 million followers on her official Instagram account @katgraham.

She is also active on Twitter with around 1.9 million followers. She owns a YouTube channel named Kat Graham and it has more than 57.2k subscribers at the moment.

Kat Graham reveals her new identity ‘Toro Gato’! What does that mean?