Kat Von D married Oliver Peck, who is a widely traveled tattoo artist and is every bit talented as Kat is considered to be, had a rocky marriage due to Kat’s alcoholism, self-centered behavior, and body image issues.

He said he was happy to support her through her troubles but wanted a divorce after finding out that Kat cheated on him. They split in August 2007.

Kat dated American musician, producer, and director, Alex Orbison for about a year. He was often seen on her LA Ink reality show when the two were dating. An inexplicable lack of interest on Kat’s part led her to break up with Orbi in 2008 leaving him heartbroken and resentful.

Orbi confessed to a friend via a MySpace post that Kat made major promises of love and he fell for them very seriously after staying single for 5 years. He felt betrayed by how conveniently she fell out of love with him considering how smitten she was when they first met.

Kat is extremely fond of Scandinavian bands and spends a lot of time with musicians from that territory for a brief period that she might be dating Finnish musician, Ville Valo.

But, Kat went public with her relationship with Nikki Sixx soon after, so that rumor did not last. Kat justified on her MySpace account back in 2008 that dating Nikki, co-founder of the Motley Crue band, as a result of their long-term acquaintance and friendship. Kat was a huge fan of Nikki’s music and they got involved only after her alignment to Orbi was history.

In 2009, Kat could not stop singing the praises of Nikki stating, she learned a lot from him and the two shared a mutual love for reading books. However, this was not meant to last and right at the beginning of 2010, Nikki announced an amicable split.

Jesse James, the famous reality star and motorcycle and car customizer, cheated on his then-wife, Sandra Bullock in 2010 which ended his 5-year long marriage to her. Kat Von D was Jesse’s rebound right after the couple split and gained much notoriety in the tabloids as a result.

Kat felt genuine sympathy for Jesse since the tabloids were projecting him as an absolute villain. They got engaged in January 2011 only to call it off in July later that year. Though Jesse managed to win Kat in August, before the year was over, Kat publicly revealed that Jesse cheated on her with multiple women that led to a messy, hostile end to their brief relationship.

Kat’s love for music helped her find love again with a famous Canadian DJ and Music Producer, Deadmau5 (or Joel Zimmerman). But, even this relationship was every bit volatile as the previous one. The two got engaged and Kat happily talked about her wedding plans on the Wendy Williams show.

They unexpectedly called off their engagement in November 2012 but got back together as the year came to an end. Six months later, a bitterly upset Kat permanently ended her relationship with Joel stating on her Twitter account that his infidelity and lies were to be blamed as the primary reason behind their split.

Kat started dating Hollywood stuntman, Steve-O, most famous for his crude comic reality stunt series and film series, Jackass. Steve confirmed his relationship with Kat on Instagram reaffirming his faith in Kat’s lifestyle and values. However, by March 2016, both Steve and Kat deleted all the pictures with each other from their respective social media accounts confirming the end of their relationship.

In 2016, artist, author, and musician, Rafael Reyes first met Kat Von D when she appeared in one of his music videos. Then, he wrote another song especially for her and she contributed her vocals to that song also. 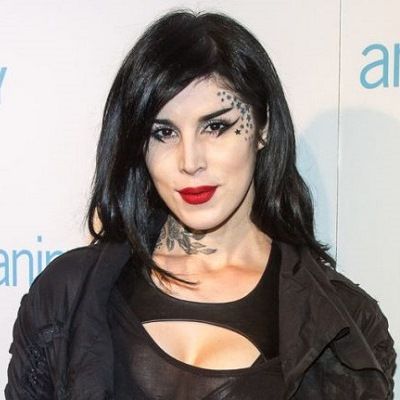 I don't care what people think about me. When I look in the mirror, I wanna like what I see.

The artwork on my packaging was something I painstakingly micro-managed - for example, I treat it like a tattoo, taking into consideration the muscle structure and seeing were the line lands on the existing body.

There is no point in developing anything at the cost of exploiting and abusing animals. Not only is it important for me to create a 100% cruelty-free brand but also send out a very clear message to both consumers and companies out there: testing on animals in the name of beauty is cruel and unnecessary.

Who is Kat Von D?

Likely, she is best known for her work as a tattoo artist on the TLC reality television show LA Ink, which premiered in the United States on August 7, 2007, and ran for four seasons.

Kat Von D was born on 8th March 1982 in Montemorelos, Nuevo León, Mexico. Her birth name is Katherine von Drachenberg and she is currently 39 years old.

Her father’s name is René Drachenberg and her mother’s name is Sylvia Galeano. She received classical training in piano when she was six years old, developing a liking for Ludwig van Beethoven’s masterpieces.

She was influenced by punk rock bands to such an extent that she spent most of her time listening to Misfits and Ramones, at the tender age of 12. Her artistic craft soon came out when she picked up a tattoo machine and created a Misfits skull on her friend.

Talking about Kat’s education history, she dropped out of school at 16 to work as a tattoo artist and was employed at a local professional shop, Sin City Tattoo, in 1998.

Talking about her profession, Kat Von D spent time in various shops, such as Blue Bird Tattoo and Inflictions, gaining experience, and polishing her talent. Additionally, she landed at True Tattoo, where she worked with Tim Hendricks, Clay Decker, and Chris Garver, who recommended her to try her luck at ‘Miami Ink’.

In addition, she worked for two seasons on ‘Miami Ink’, a reality television series on the TLC network, but her differences with owner Ami James forced her to leave. She returned to Los Angeles and opened her own shop, High Voltage Tattoo, in Hollywood, California, in 2007.

This helped her telecast her own reality series ‘LA Ink’ on TLC, which features tattoo stories of various clients.

Whereas, her second book ‘The Tattoo Chronicles’ was out in October 2010 and was listed at #3 in The New York Times ‘Hardcover Advice & Misc’ best-sellers. She has acted in a few movies, which include ‘Bam Margera Presents: Where the Fuck Is Santa?’ (2008) and ‘The Bleeding’ (2009).

However, her constant verbal clashes with the owner led to her termination. Her 2007 reality television series ‘LA Ink’ became one of the highest-rated programs on the TLC channel, handling distinguished celebrity clientele, including actor Stephen Baldwin, comedienne Margaret Cho, and rocker Dave Navarro.

She endorses her own brand by the name of Kat Von D which represents: A makeup line launched in 2008 for Sephora cosmetic store, which is against animal testing and contains no animal-related by-products.

Merchandise in her name was sold at her Los Angeles Tattoo parlor.

There was a rumor about Kat that she is an anti-vaxxer or anti-semitic. Currently, she is far from rumors and controversies.

Kat’s hair color is light, Ginger Brown and her eye color is dark brown. Furthermore, her dress size is 6 (US) and her shoe size is 9 (US).

The story of the feud between the best friends makeup artist Jeffree Star and entrepreneur Kat Von D!