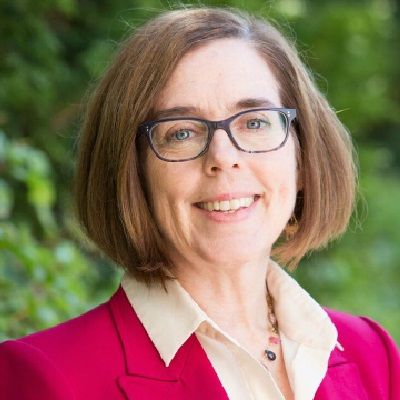 Imagine trying to learn without a dry place to sleep, eat, and do homework. Children cannot succeed in school if their lives out of school are in total chaos

Oregonians expect the state to prioritize the health and well-being of them and their families.

Kate Brown is married to Dan Little. Dan is a retired natural resources biologist by profession. They married in October 1997.

However, the wedding happens to be the second wedding of Dan. Through his first marriage, he has two children including a son, Dylan and a daughter Jessie.

As of now, Kate lives in Mahonia Hall, Salem, Oregon along with her husband and stepchildren.

Who is Kate Brown?

American Kate Brown is a Lawyer and Politician. She is renowned as the 38th governor of Oregon and a member of the Democratic Party.

She is the first bisexual person who was elected to the governor of the states.

As of now, Kate is being criticized for not taking COVID-19 seriously as the world is under the wrap of the virus. The time, when the city needed the most to be a lockdown, She was absent to give a mandated stay-home stay. Oregon Nurses Association also begged her to be more concerned about the lockdown.

Instead of her, Ted Wheeler and the other 25 mayors made the plan of Lockdown. Later, on the 23rd of March, she gave an executive order for a mandatory for stay-home.

She was born Katherine Brown on the 21st of June 1960 in Torrejón de Ardoz, Community of Madrid, Spain.

She has three siblings that include two brothers and a sister.

In 1978, she completed High School from the Mounds View High School. Later, in 1981, she graduated from the University Of Colorado Boulder with Honors in Arts with majors in environmental Conservation.

Also, in 1985, she earned Juris Doctor from the Northwestern School of Law. Also, she received a certificate in environmental law from the University.

– In 1991, Kate Brown was appointed to the Oregon House of Representatives. Five years later, she was elected to be the Oregon State Senate.

– Later, in 2004, she became the first woman to be Oregon’s Senate Majority Leader.

– In 2008, she became the Oregon Secretary of State winning the general election against Rick Dancer with the vote margin of 51-46%.

– On the 18th of February 2015, she succeeded in the position of the governor when the former John Kitzhaber resigned from the post prematurely.

She has an estimated net worth is calaculated at around $1.5 million. Her earnings as a governer of Oregon are in the range of $124k or above. Provided that, the highest salary as a governor of the United States is $202k.

Also, her husband, Dan Little makes in the range of $51k as a Natural resources biologist.

– When she was the Secretary of State, she faced a serious criticism when she revealed that she had made a mistake for scheduling for Labor Commissioner between Democrat Brad Avakian and Republican Bruce Starr.

– In 2019, she faced a huge controversy when she appointed Misha Isaak as the governer’s general attorney. The controversy started when Oregon public records advocate Ginger McCall announced that she is resigning due to Issak.

Later, Issak resigned for the post stating that he has worked very hard to gain his professional reputation away from any ethical reproach. Further, he added that he won’t be accepting any more damage to his reputation.

Kate Brown has blue eyes with light brown hair. Her height is 5 feet and 7 inches and weighs around 59 kg.

You may also read the bio, age, education, career, net worth, salary, and controversy of Sarah Hurwitz, Lilly Ghalichi, and Jules Wainstein.