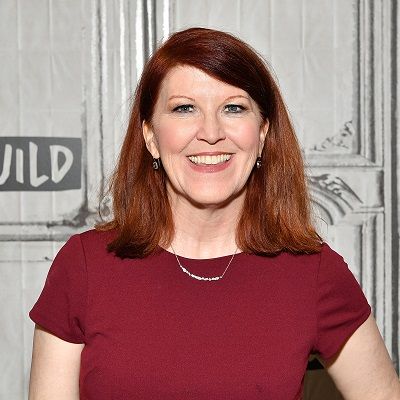 I think the genetics of being Irish are that you sort of prefer when it's rainy and cloudy. It's just genetic

I think the whole concept that women aren't funny is dead. It's over

Kate talked about being a late bloomer in love in one of her interviews on People. She is in a relationship with Chris Haston, a photographer. The two have been dating each other since the year 2006 and are still together. She is happy that she found her love late and she appreciates it.

Kate and Chris met on the sets of The Office

Kate was shooting for “The office” when she met Chris Haston. Chris was a photographer at NBC. He is very supportive of her and they have been together for years now.

Who is Kate Flannery?

Katherine Patricia Flannery better known as Kate Flannery is an American actress. She is famous for playing the role of Meredith Palmer as an alcoholic and promiscuous single mom on the NBC series The Office. She was the host of Standup in Stilettos for two seasons on the TV Guide network.

Kate was born on 10th June 1964 in Philadelphia, Pennsylvania, US. She was born to father Thomas A. Flannery and mother Joan Donnelly. Similarly, she has six siblings. She has a twin sister who works as a social worker.

Kate attended Saints Colman-John Neumann School and Archbishop John Carroll High School in Radnor, Pennsylvania. For two years she studied at Shenandoah University. She graduated from the University of the Arts in Philadelphia.

Kate started her career doing odd jobs. Kate was a former member of “The Second City” National Touring Company and is an original member of the Chicago Annoyance Theater. Her debut in sitcoms as an actress was in the 1990s.

She has appeared in over 15 shows including The Miss Vagina Pageant and The Real Live Brady Bunch. Likewise, she has done many stage work and is the former musical director of the Los Angeles Drama Club.

Kate Flannery is one of the casts of the American television sitcom The Office. It aired on 24th March 2005 and has 9 seasons. Kate played the role of Meredith Palmer. She portrayed as a promiscuous alcoholic divorced single mom.

An interesting fact is that while she was cast for her first drama, The Office in 2005, she was still working as a waitress in the first season.

She has appeared on shows like The Bernie Mac Show, Boomtown, Curb Your Enthusiasm and many more. In the year 2008, she appeared on Last Comic Standing and in 2010 she was on Wizards of Waverly Place as Elaine Finkle.

She worked on ABC’s American Housewife in the year 2016 as Crossing Guard. Similarly, she appeared in an episode of Brooklyn Nine-Nine. In the year 2019, she was announced as one of the celebrities to compete on season 28 of Dancing with the Stars. Her partner was Pasha Pashkov.

Awards and net worth

Kate was nominated for the Screen Actors Guild Award for Outstanding Performance by an Ensemble in a Comedy Series.

She has an estimated net worth of $2 million.

Rumors of being married to boyfriend Chris Haston

According to IMDB and other sources, there are rumors that Katy married her boyfriend Chris Haston. The date of their marriage is unknown but they are rumored to have been divorced in the year 2016. Neither Katy nor Chris confirmed about their marriage.

Kate has a height of 5 feet 4 inches and weighs around 67 kg. Her hair color is red and she has hazel color eyes.