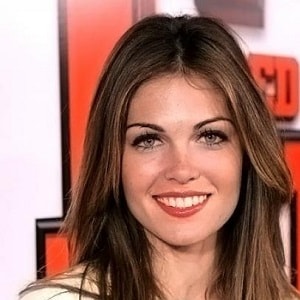 I usually play the bitch. Or the lesbian.

They have welcomed two children: Henry Willian Johnson on January 12, 2013, and Chapel DeFreine Johnson on August 6, 2016.

Who is Kate French?

Kate French is an American actress and model. She is famous for her role as Niki Stevens on ‘The L Word’. She has been awarded for Best Actress for ‘Last Man Club’ two times.

She was born on September 23, 1984, in Flemington, New Jersey, USA. Her birth name is Kate Lauren French and she is currently 36 years old.

She spent her childhood in South Kingstown, Rhode Island, and Lambertville, New Jersey. Then, her family moved to New York and settled in Quogue on Long Island and her mother remarried.

She holds American citizenship and her ethnicity is a mix of English and German.

She graduated from Westhampton Beach High School in 2003. Later, she studied at the University of California, Santa Barbar but dropped out to start her acting career.

Kate French followed her parent’s footsteps and pursued her career in modeling up until her senior of high school. But, she had a passion for acting.

She debuted on the big screen in 2006 with a small cameo role in the film ‘Accepted’ and her appearance on the small screen was in the prime-time telenovela soap opera ‘Wicked Wicked Games’.

She made herself recognized after she joined the cast of ‘The L Word’ where she played the character of closeted lesbian actress and girlfriend of Jenny Schecter. Kate made her recurring role as Renne on ‘One Tree Hill’ in 2010, and had a recurring guest role as Riley Westlake in the Hawaii-set teen drama ‘Beyond The Break’.

Her television guest role includes in the series ‘Up All Night’ and played a supporting role in ‘Channeling’. She appeared in the television advertisement for ‘Bud Light’ and ‘7 Up’ in 2010.

She has collected a net worth of around $2 million from her professional career. Her salary is unknown.

She appeared alongside comedian Kathy Griffin in a pro-sex marriage and urging California voters to vote against Proposition 8.

To know more about Kate Corbett, Terria Joseph, and Tara Strong, please click on the link.