Kate met and married her husband, Jon Gosselin, on June 12, 1999. She got pregnant with their twin’s Care and Mady. Again Kate was pregnant, this time however with sextuplets. On May 10, 2004, she gave birth to their sextuplets.

Three of them were boys she later named- Aaden, Colin, and Joel. The other three were daughters named- Alexis Hannah and Leah. Common in multi births, she gave birth to the sextuplets 10 weeks early.

Due to some reasons, the couple announced divorcing soon. Kate is currently a divorced mother after separating from her husband Jon Gosselin in the year 2009. 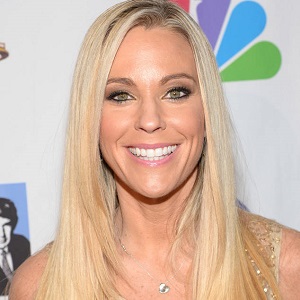 I would love to be the voice of a cartoon character in a movie for my kids. I think that would be fun

If you take care of yourself and try to look nice, it's reflective of how you feel about yourself

In my real life, hard work, doing my job, working well with others, and finding solutions without drama has never gotten me fired before.

Who is Kate Gosselin?

Kate Gosselin is an American television personality. She achieved national and international recognition on the US reality TV show Jon & Plus 8.

Kate was born on 28 March 1975 in Philadelphia, Pennsylvania. As of 2021, she is 46 years old. Her nationality is American and her ethnicity is mixed(French, Irish, and Welsh).

She is the third child of Charlene(mother) and Kenton Kreider(father). She has 4 siblings- sisters: Kendra, Christen, and Clarissa, and a brother named Kevin.

Kate attended The Reading Hospital and Medical Center in Reading, Pennsylvania for a diploma in Nursing. After her graduation in nursing, she started working as a dialysis nurse in Wyomissing Pennsylvania.

Talking about her career, Kate as a Reality TV Star she met and married her husband, Jon Gosselin, after the birth of the sextuplets her family of 10 was featured in NBC’s reality show Home Delivery. The show even renovated their home to accommodate the new family.

After their first television debut, the family was again featured in Discovery Health as “Surviving Sextuplets and Twins”. This show aired in the year 2005. Because of the high ratings from the viewers, the couple and their children were signed for yet another TV show called Jon & Kate Plus 8. This show aired in April of 2007. This show documented their daily lives and how they survive.

Due to some problems, they separated and the show started becoming unclear about whether it would go or not. But Kate Plus 8 again premiered their new season on November 22, 2016. The repeats of the show still air on TIC. And also Kate Gosselin appeared on multiple shows except her own.

She appeared as a contestant on the reality show “Dancing with the Stars” in the year 2010. Kate has written 3 non-fiction books so far. She first published a book called “Multiple Blessing”. And her third book “I just want you to know” was published on April 13, 2010. All of her books ended up in the best-selling.

Kate Gosselin: Salary and Net Worth

Currently, there are no rumors regarding Kate Gosselin’s personal and professional life.

Ex-husband of Kate Gosselin, Jon Gosselin celebrates his children’s birthday and shares on his Instagram. Has not posted a picture together since 2016