Kate Hudson Shares She is not in a Rush to Marry her Fiancee Danny Fujikawa!

Posted on November 17, 2022 | Published By: Natalie | In Engagement , Relationship , Wedding
Share this 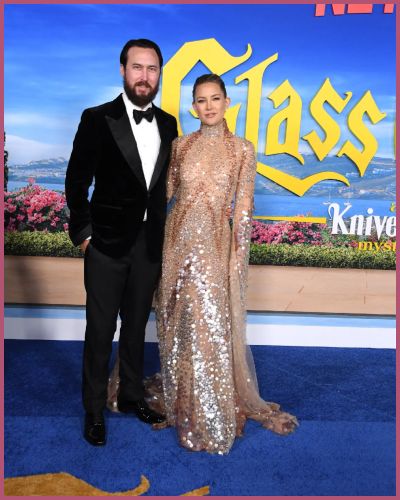 We won’t see Kate Hudson as a bride anytime soon.

The actress revealed that she’s not in a rush to marry her former guitarist fiancee Danny Fujikawa and that marriage is not on the cards yet.

The Glass Onion star, 43, attended the Knives Out sequel’s premiere in Los Angeles on Monday where she revealed:

“I love that man. He’s right over there, hiding, but the last thing we’re doing right now during the holidays is planning anything but the holidays,”

Fujikawa popped the question to Hudson in September 2021 after dating for nearly 5 years. They confirmed their romance in December 2016. Two years later, in October 2018, they welcomed their first child together, a baby girl named Rani Rose.

What many don’t know is this will be Hudson’s second marriage. In December 2000, she married Chris Robinson, the Black Crowes Frontman, with whom she shares an 18-year-old son Ryder.

Their marriage, however, fizzled and the pair divorced in October  2007.

Hudson is also a mother to an 11-year-old Bingham whom she shares with her ex-fiancee Matt Bellamy. After three years of engagement, the couple parted ways.

The first-time Hudson met Fujikawa was years ago through the musician’s stepsisters Erin Foster and Sara Foster, while she was still married to Chris.

The star also revealed that Fujikawa took a long time to make the first move after their reconnection years later.

“A year ago today Danny took me on a hike and what I thought was just a hike with a family friend turned very quickly into an unexpected first date. No moves were made on this first date. In fact, it took months for him to make a first move!”

“And as a kiss on this bridge would have been nice, the kiss a year later was so much sweeter.”

“So on our 15th year of knowing each other we were able to open our hearts to each other to feel so much pure love and it’s been truly incredible.! Happy first date anniversary baby. #LoveThisMan #WhatAYear.”

More about Danny Fujikawa, the man who stole Hudson’s heart

It took Kate and Danny 15 years to realize that their relationship was something special.

Fujikawa was the singer and guitarist for an LA-based band called Chief. The popular group released the EP The Castle in 2009 and their debut full-length album Modern Rituals in 2010. But the band broke up months ago in June 2011.

After the band’s failure, Danny founded Lightwave Records with The Delta Mirror frontman Chris Acosta in 2013.

What many don’t know is Danny is related to the Foster family through his father, the late Ron Fujikawa. Ron was in a relationship with Rebecca Dyer at the time of his passing in the year 2012.

Though Ron and Dyer never said I DO, the Foster sisters loved Danny and considered him their stepbrother.

The two first met over a decade ago when the actress was still with Chris.

In an Instagram post in December 2017, while celebrating their one-year dating anniversary, The Almost Famous actress wrote:

“The first time I met Danny I was 23 and enormously pregnant with Ryder,”

“His step sisters are my best friends @sarafoster @erinfoster and so it goes we have been in the same circle for over a decade!”

Fujikawa, who is Asian-American is proud of his heritage. His grandfather Dr. Yoshihiko Fujikawa, was one of the very first Japanese to go to a medical school in the US.

Danny’s music career came in handy for Hudson as he handled the editing and music for one of the actress’s Happy x Nature clothing line products.