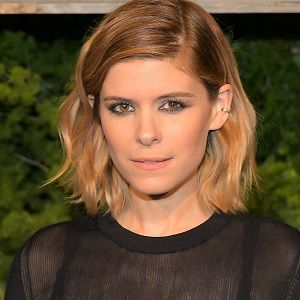 Everybody has to be responsible for their own actions - and if they do something wrong, I believe in paying for it

I hate being in Los Angeles when it's football season. I want to be in New York. It just doesn't feel right if I'm away

Keeping your private life as private as possible is the smartest thing. Kate Mara

Kate and Jamie are married!

Kate is a married woman. She tied the knot with Jamie Bell. The couple began dating in 2015 and engaged in January 2017.

Recently, in July 2022 she shared her pregnancy news.

Update: Kate Mara and Jamie Bell welcomed their first child, a daughter, in May 2019 and their second child a baby boy in November 2022.

Later on July 15, 2017, the pair tied the knot. Since their marriage, Kate and Jamie have maintained a perfect relationship together and have never been involved in any extramarital affairs or disputes.

Prior to her marriage, Kate was in a relationship with Max Minghella. However, the couple couldn’t handle their relationship for too long and broke up after four years of relationship in 2014.

Furthermore, there was also a rumor about her relationship with Justin Long. Back in 2008, she also dated Charlie Cox and separated soon.

Who is Kate Mara?

Kate Mara is an American actress. She got huge recognition from the 2013 Netflix political drama House of Cards as Zoe Barnes.

Furthermore, she has also appeared in the superhero film Fantastic Four as Susan. Moreover, her other notable works include The Martian, Morgan, and American Horror Story: Murder House

Kate was born on February 27, 1983, in Bedford, New York, United States. She is the daughter of the vice president of the New York Giants for player evaluation Timothy Christopher Mara and Kathleen McNulty Mara.

Furthermore, she has one sister Rooney Mara and two brothers Daniel and Conor.

Talking about her nationality, she is American and her ethnicity is mixed. From the beginning of her childhood, she had a keen interest in acting and began to learn from a very early age.

Concerning her education, she attended Fox Lane High School. Later, she was selected into the Tisch School of the Arts at New York University to study musical theater. However, she deferred her education because of her acting and singing.

kate began her acting career in the NBC legal drama series Law & Order in 1997. In 2000, she landed two roles in the series Madigan Men and Ed.

Furthermore, she also appeared in three tv series in 2003 which include Everwood, Nip/Tuck, and Cold Case.

Besides their TV career, Kate has also done many movies career which including her debut role in the 1999 movie Joe the King.

Soon after that, she grabbed many movies in various roles such as Tadpole, Zoom, Urban Legends: Bloody Mary, and much more.

Additionally, she has done many movies later which include Iron Man 2, Deadfall, Transcendence, and much more. In 2015, she landed the role of Sue Storm in the superhero movie Fantastic Four followed by Morgan and The Martian.

Recently, she has acted in three movies in 2017, Megan Leavey, My Days of Mercy, and Chappaquiddick.

Being a famous actress, Kate earns a healthy amount of money from her career. Currently, she has a net worth of $14 million.

As of now, she has won CinemaCon Award for Fantastic Four and also won the Face of the Future Award in 2015.

Besides this, she has been also nominated in various categories such as Razzie Award, GFCA Award, Primetime Emmy Award, and a few more.

So far, there are not any drastic rumors regarding her personal and professional life. Furthermore, she has never been linked to any controversy to date.

Kate has a height of 5 ft 3 inches and weighs 52 kg. Furthermore, she has a beautiful pair of light brown eyes and lights brown hair.

Kate Mara is Pregnant with Baby no. 2 with Husband Jamie Bell!