Kate McKinnon is a regular member of the hit shows, Saturday Night Live and The Big Gay Sketch Show. She is a lesbian and is in a relationship.

Kate McKinnon’s sexual orientation is not straight, she is a lesbian.

She is currently dating Jackie Abbott. Jackie Abbott is an actress and photographer. They revealed about their relationship publicly in 2017 Emmys and it was confirmed in RuPaul’s Drag Race.

Previously, she was in a romantic relationship with Marla Mindelle and the couple has started dating in 2013 and the news of their separation was in 2015.

She has adopted a pet cat, Nino Positano and treats it as her son. 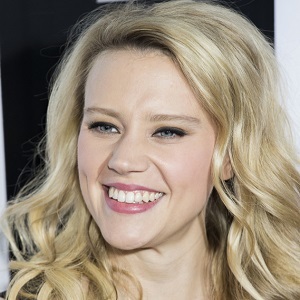 Comedy is a tool of togetherness. It's a way of putting your arm around someone, pointing at something, and saying, 'Isn't it funny that we do that?' It's a way of reaching out

You've gotta believe in yourself, and you just have to work harder at it than you've ever worked at anything before in your life. And if you keep doing that and keep believing in yourself, great things do happen

I tried for a short time to be something I wasn't, and had no success with it. It's a practical solution to just be yourself.

Who is Kate McKinnon?

Kate McKinnon is an American comedian and actress. She is in the entertainment field since 2007.

Kate is best known for her work on the popular comedy series The Big Gay Sketch Show and Saturday Night Live. She is also known for her character as Dr. Jillian Holtzmann in the 2016 Ghostbusters reboot.

Kathryn McKinnon Berthold was born on 6 January 1984, in the Long Island town of Sea Cliff, New York. She has an American nationality and has a mixed ethnicity of German and Scottish.

She is the daughter of Laura Campbell(mother) and Michael Thomas Berthold(father). Her birth name is Kathryn McKinnon Berthold. Her mother worked as a  parent educator and her father worked as an architect.

She has a younger sister Emily with whom she was raised. Her father passed away when she was 18 years old.

Mckinnon studied at North Shore High School and attended Columbia University where she graduated with a theater major.

Talking about the career journey of Kate McKinnon, she is active in the entertainment field since 2007 and she is still active in it. She began her career journey joining the original cast of Logo TV’s The Big Gay Sketch Show in 2007. She appeared in all three seasons of the show.

Her career has already started to blossom in the entertainment field. She has appeared on numerous television series doing short roles.

In 2010, she appeared in the short film Mr. Ross portraying the character of Debby. Her career took on a successful path when she became the main cast of the television series Saturday Night Live in 2012. The show is still running and she has won various awards for her work in the show.

Besides acting, she has also given her voice in movies and television series including Giant Sloth, The Angry Birds Movie, Finding Dory, Ferdinand, Nature Cat, The Simpsons, and The Magic School Bus Rides Again.

She has been nominated for several awards shows for her impressive acting skills and she has successfully won NewNowNext Awards, Ashland Independent Film Festival Award, American Comedy Award, Women Film Critics Circle, and much more.

She suffered a controversy when she mocked Kellyanne Conway during this week’s SNL episode.