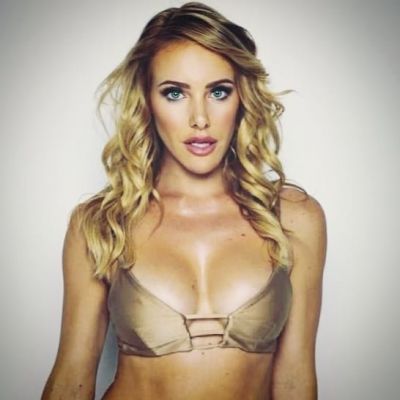 Talking about her relationship details, Kate Quigley is presently single and she is not dating anyone at the moment.

Earlier, the star was dating Darius Rucker who is a famous American singer and songwriter. The couple started dating in July 2020. Kate had shared a picture of them on her Instagram. However, they split soon.

Before, she married her school boyfriend at the age of 19. The former couple was together for 10 years before separating. Quigley has also dated Chris Bukowski, a comedian Bobby.

Who is Kate Quigley?

Kate Quigley is a well-recognized American comedian, actress, model, podcaster, and television writer. Quigley is widely famed as the host of Playboy TV’s Undercover and the 2016 AVN Awards.

Moreover, she has been featured as a headlining comedian at the Improv, Laugh Factory, Icehouse, Comedy Store, and Haha Comedy Club in Hollywood.

Kate Quigley was born on 8 February 1982. At present, her age is 39 years old. Likewise, her birthplace is Canton, Ohio, the USA.

Kate is the daughter of her father, Bernard Doherty whereas her mother is Barbara Doherty. Moreover, she has two brothers named Glen Doherty and Greg Doherty.

Talking about her nationality, Quigley holds an American identity whereas her ethnicity is Caucasian.

Regarding education, the comedian graduated and left home to study theater at the Chicago College of Performing Arts. Initially, the star completed her high school graduation at Jackson High School in Massillon Ohio. Quigley also completed her bachelor’s in acting from Roosevelt University.

Professionally Kate is a standup comedian and actress. She began her career in the famous Tv show, The Office. Later in 2006, the comedian got a chance to work on TV series named Star Trek: Hidden Frontier where she was featured as Silan.

Quigley in advance began her standup comedy career in 2009. Some of her stand-up credits are CMT’s The Jost Wolf, FOX’s Talkshow with Spike Feresten, and NBC’s The Megan Show. She has also hosted the AVN Awards and MTV’s ADD TV. Some of her TV credits are The Josh Wolf Show, The Office, and The Danny Comden Project.

The comedian, Kate is also a podcaster and has featured in #DateFails which has more than 50k downloads per week. She has been featured in Lovely Lady of the Day & The Chive’s Girl You Should Know.

Kate has additionally been a regular member of the show such as Improv, Laugh Factory, Icehouse, Comedy Store, and Haha Comedy Club in Hollywood.

A famed Comedian, Quigley has earned a handsome amount of money from her multiple profession.

It is reported that Kate Quigley has an estimated net worth of $5 million. She lives a luxurious lifestyle along with her family.

Other than that, Kate has never been part of any controversial matter or rumors till now.

39 years old star, Kate has beautiful looks and an admirable personality. She stands at a height of 5 feet 7inches. Also, she has a balanced bodyweight of 57 kg.

Furthermore, Quigley has blue eyes whereas her hair is blonde. Her body size is 31-24-35 inches(chest-waist-hip) respectively.

She has also done breast implants in the past few years. However, the surgery didn’t go well and it had to be redone thrice.

Regarding her social media presence, Kate Quigley is an active personality on social media. Kate has more than 177k followers on her official Instagram account @kateqfunny.

Moreover, Quigley is also available on Facebook with nearly 11k fans and supporters.

Madeline Holtznagel, girlfriend of billionaire Justin Hemmes moves into his Coogee apartment and shops at IKEA!