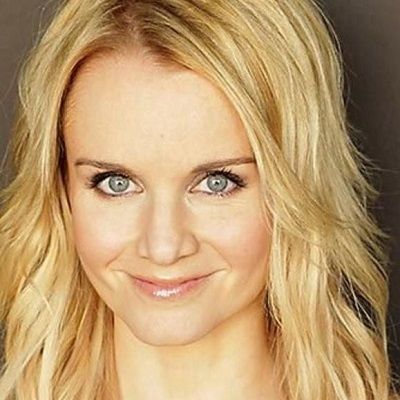 What is the relationship of Kate Reinders?

She married Andrew Samonsky on May 30, 2016. Andrew is also a theatre actor and singer.

Together, they have one child, Luke Samonsky.

However, she manages her time for the Work, friends and the family.

She is a more caring mother and always looks after her child.

Who is Kate Reinders?

American Kate Reinders is an actress known for her work in Work It, Grudge Match, Saints Row: Gat Out of Hell, and High School Musical: The Musical- The Series.

She is also a singer, who has already performed in different Broadway shows.

As of December 26, 2019, The official Music video Titled Role of a Lifetime from High School Musical: The Musical: The Series was released. Reinders and Lucas Grabeel have sung this song.

Kate Reinders was born Kate Anne Reinders on December 10, 1980, in Seattle, Wahington, the U.S. Her birth sign is Sagittarius.

In 2001, Reinders’ started his theatre career with the show The Adventures of Tom Sawyer as an Amy Lawrence and Becky Thatcher.

She joined the Broadway revival of Into The Woods, for the role of Cinderella, Little Red Riding Hood, Milky White, and Rapunzel in 2002.

In 2005, she played the role of Glinda alongside Ana Gasteyer as Elphaba, on Wicked. She was nominated for Best Actress in a Principal Role for the Joseph Jefferson Award for this Play.

In 2007, she appeared in the show Party Come Here, which ran at Theatre Festival from July 25 to August 5. She was part of a play called The Fabulous Life of a Size Zero, which ran at the Off-Broadway DR2 Theater. Besides, Reinders works with Sarah Litzsinger, who is an American actress and singer, in the same band named Tastiskank. They won the Comedy duo nominee and Breakout Award at HBO Comedy Arts Festival.

On October 8, 2018, she replaced Kara Lindsay for the role of Cynthia Weil in the show, Beautiful: The Carole King Musical.

High School Musical: The Musical- The Series is a Comedy and musical series which was released on November 8, 2019, and aired on the Disney channel. It was created by Tim Federle.

Kate Reinders played the main role of Miss Jenn, who is a music teacher of the high school students. The other main character of this series, are Olivia Rodrigo, Joshua Bassett, Larry Saperstein, and Matt Cornett.

Matt’s net worth is approximately $1 million US.

The singer’s average salary in the United States is around $42 k US.

The Disney channel actors’ average salary is around $67 k US per year.

Reinders has hazel-eyed and blonde hair.

She joined Twitter in December 2011 and has 7.7 k followers.

She is also active on her Instagram and she has 15.8 thousand followers.