Kate Snow is an award-winning NBC national correspondent. She has also served on CNN and ABC. Kate is married to Chris Bro. Together they have two children.

The NBC national correspondent Kate Snow is a married woman.

She tied the knot with Chris Bro after being in a beautiful relationship. As a married couple, they have also welcomed two children Zach Bro and Abigail Keller Bro. Since their marriage, the pair have maintained a healthy relationship between them.

Currently, Kate and Chris are enjoying their company and living elegantly. 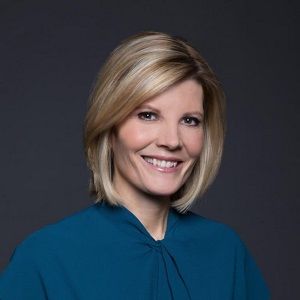 Teaching my kids to give back is an essential part of parenting. It's not something that's optional. Compassion is one of the basic values that I want my children to have: that if they see a need, whether it's around the corner or thousands of miles of away, they should feel motivated to do whatever they can to help

Make A Difference Day is a great way to introduce kids to the rewards of volunteering. It's fun, it's focused and it's empowering to know that millions are motivated to do the same.

Who is Kate Snow?

Kate Snow is an American television journalist who currently works as a weekday anchor for MSNBC Live. Furthermore, she is also an Emmy-winning National Correspondent for NBC News and anchor of NBC Nightly News.

Prior to NBC, she was a correspondent for the Primetime Newsmagazine, Rock Center with Brian Williams.

Kate Snow was born on June 10, 1969, in Bangor, Maine, United States. She is the daughter of then professor Dean R. Snow.

Talking about her early life, she grew up in New York along with her parents. Her parents shifted to New York when she was six months old. Her nationality is American and her ethnicity is Caucasian.

Kate completed her graduation from Cornell University. Later, she earned a master’s in international affairs from Georgetown University.

Kate began her career as a reporter for ABC’s Good Morning America’s White House in 2003. Later, she got the post of co-host of the morning show’s weekend edition.

Prior to ABC, she had also worked at NPR and NBC Radio followed by KOAT-TV as a reporter. Furthermore, Kate has also served on CNN from 1998–2003. So far, she has covered major political news such as five presidential elections, the White House, and Congress.

During her career at ABC, she was the anchor of the weekend edition of ABC’s Good Morning America for almost six years.

Currently, the veteran journalist is a weekday anchor for MSNBC Live. In addition, Kate is also an Emmy-winning National Correspondent for NBC News and anchor of NBC Nightly News.

In her journalism career, Kate has won several awards which include the News & Documentary Emmy Award for Outstanding Live Coverage of a Current News Story.

Being a legendary journalist, Kate Snow earns a handsome amount of money from her profession. However, her salary is unknown while her net worth is estimated to be around $3 Million as of 2022.

So far, there are not any drastic rumors regarding her personal and professional life. Furthermore, she has never dragged into any controversy to date.