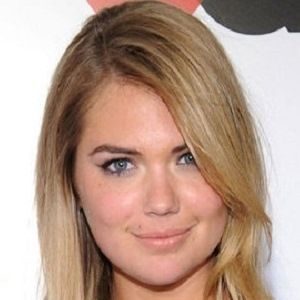 I just think that pick-up lines in general are horrible. None of them work. I just want to say, "Ah, that was really cheesy," and walk away [...] I would've been like "Oh my gosh, don't touch me!". But then there's a balance. Like this one guy was trying to be funny - he was very direct and said, "Listen, let's be friends with benefits." And I was like "Nope, I'm more of a girlfriend type."

I was at a photo shoot and I was wearing a cross necklace that my mom bought me, and somebody made a joke like "Why are you wearing a cross? Like you would be religious." And then they took it away. I was really affected by that. The whole thing made me realize that I do want a cross with me, at all times.

Lastly, she started dating Justin Verlander, American professional baseball pitcher with the Detroit Tigers of Major League Baseball in 2012. She met him while filming MLB 2012 commercial. From July 2012 until December 2012, the duo was dating together. A year later, the couple reconciled in December 2013, as soon as Kate separated from Maksim. The duo got engaged in April 2016. On November 4, 2017, Justin and Kate got married in Tuscany, Italy in the church. They welcomed their first child together, daughter Genevieve Upton Verlander on November 7, 2018.

Who is Kate Upton?

Kate is an American model and actress, she is well known for her finest performance in the Sports Illustrated Swimsuit magazines. In 2008, she also started her career with Elite Model Management and later worked with IMG Models. During 2013, she also featured in the UK’s edition of the Vogue.

Kate was born in St. Joseph, Michigan, the United States on June 10, 1992, to parents Jeff Upton and Shelley Upton, her father is an athletic director in high school and her mother was a former Tennis champion of Texas. She has three siblings namely, Christie Williams, Laura Upton, and David Upton.

On talking about her profession, she began her career as a horse riding champion. Whereas she and her horse Romaine Pony took part in many events and after she changed her horse at 18 years of age, she won the Western pleasure in 2009.

During 2008, she also joined the Elite Management Model and walked in a few fashion shows. On the same year, she moved to the New York City and signed with IMG Models.  During 2011, she also appeared in the Sports Illustrated Swimsuit Issue.

During 2012, she posed for the cover of GQ magazine. On that year, she also featured on the cover of UK’s an Italian edition of the Vogue Magazine. Since then, she has also worked with several fashion magazines including Vogue and Vanity Fair.

Whereas, she also made debut in the Hollywood from the Tower Heist (2011). Then, she also appeared in The Other Woman (2014). During  2017, she also featured with Alexandra Daddario in The Layover, a road trip sex comedy film. Likewise, she also enacted in James Franco’s film adaptation of The Disaster Artist-  a biopic movie.

Kate Upton: Salary and Net Worth

There is no information about her salary. Her net worth is around $7 million.

There was a rumor that, she is sparking plastic surgery. Currently, there is no any such rumors and controversies regarding her personal and professional life.

On talking about her body measurements, Kate has a height of 5 feet 10 inches. Additionally, she weighs is 71Kg. In addition, she has a measurement of 39-28-36 inches respectively. Kate’s hair color is blonde and her eye color is blue. Furthermore, her dress size is 8 (US)and her shoe size is 8.5 (US).

Victoria’s Secret’s annual fashion show is canceled from this year!