Internet star Katelyn Elizabeth is low-key about her love affair.

Katelyn hasn’t yet shared anything about their relationship officially. So we can say that she is single at the moment.

But, she usually posts various videos with Calvin Falvey and there are different speculations that they might be dating. Yet the exact information is unknown. The duo spends much time together and so the rumors about them being in a relationship were spread. 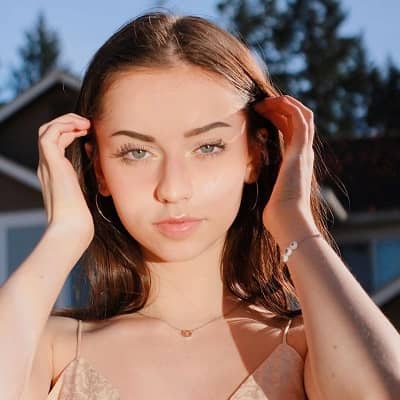 Who is Katelyn Elizabeth?

Katelyn Elizabeth is an American Social-media influencer, Tiktok Star, and a content creator. She is popular for lip-syncs, vlogs, and fun videos on her TikTok account.

The star is also managed by Vivid Management.

Katelyn was born on June 28, 2002, in California, USA. She holds an American nationality and her ancestry is of Dutch origin.

Despite being a rising TikTok star, the details of her parents are unknown. She has a brother and a sister.

Katelyn must have acquired good qualification but its information are not available.

The star was in her mid-teens when she began making content for TikTok. And she gained popularity in a short span. Her TikTok account, kkateyann has more than 1.5M fans with 76M likes as of Dec 2020.

She posts various lip-sync, comedy, beauty, edit, and similar types of videos on her TikTok account. The star also often collaborates with other creators and her friends. She frequently makes videos with Jt Casey and Calvin Falvey who are also popular content creators.

Likely, Katelyn launched her YouTube channel on Apr 15, 2015. She hasn’t posted any videos on the channel yet but has already amassed 9K subscribers. She is also popular on other social media platforms like Instagram and Snapchat. Her Instagram post nearly has a million likes. She posts various fashions, travels, selfies, her shoot, and various pics along with her friends on her insta feed.

The star is trying her best to make a mark on social media platforms and doing great at the moment.

The star name hasn’t been linked in the media to certain rumors or controversies yet.

Katelyn is approximately 5 feet (155 cm) tall and weighs around 42 kg. And likely, she has beautiful blue eyes with brown colored hair.

Her official TikTok account also holds 1.5M followers with more than 76M likes. Similarly, she has her own YouTube channel with 9K subscribers.

Also, get to know about other TikTok stars like Catherine Szabo, Xai Rivera, Rachel Brockman, and Elmo O’Dwyer.