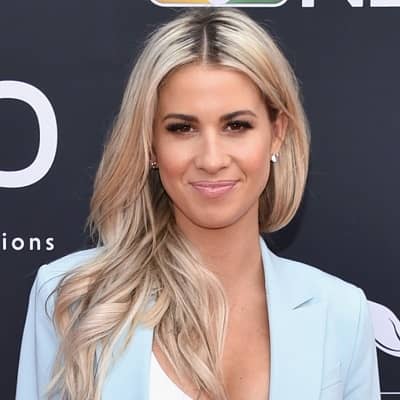 Katelyn Jae is married to Kane Brown. Kane is a popular country singer.

Dating for several years, Kane proposed to his girlfriend while watching a horror movie The Amityville Horror in April 2017.

They got engaged and announced it during a concert held in Philadelphia. Likely, the couple shared their vows on October 29, 2019, in Mint Springs Farm, Tennessee, witnessed by their friends and family.

They welcomed their first daughter Kingsley Rose in October 2019. Kane has even dedicated a song for his daughter.

Who is Katelyn Jae?

Katelyn Jae is a popular American singer and songwriter. She is also well known for being the wife of the country musician and singer, Kane Brown.

Katelyn was born on June 19, 1992. Her full name is Katelyn Rose Krapf. She grew along with her two brothers in Philadelphia, Pennsylvania, USA. Katelyn is of the Caucasian ethnic group.

Katelyn’s parents get divorced when she was young. And all the siblings were brought up alone by their mother, Karen Cerami Gerlach. Afterward, her mother married again to Pennsylvania Congressman Jim Gerlach.

Katelyn grew up spending her childhood in the suburbs of Chester Springs. She used to sing when she was young of three yrs old. And it was her teacher who notices her talent during their choir practice.

Hearing Katelyn’s version of Celine Dion’s “My Heart Will Go On,” the teacher spoke with her parents and take her to both vocal and piano lessons.

Katelyn went to school at Downington High School. Likely, she has her graduation from the West Chester University of Pennsylvania. She has her Bachelor’s degree in Music management.

Katelyn has been singing since her teenage. Pursing her musical career, she gave auditions in The Voice and American Idol. Meanwhile, she also joined and won the first season of YOBI.tv and MySpace’s “Take the Stage” contest.

Katelyn was one of the top five participants of the International Model and Talent Association conference in 2018. Furthermore, she also won the 2010/2011 Avon Voices International Talent Search. Working under the Wright Entertainment Group, she released her debut EP titled “Finally.”

After that, she released the music videos for her song “24KT (2014)” on her Youtube channel. The singer has also released other songs like 24KT and Perfect, released in 2014 and 2016, respectively.

The singer has amassed a net worth of around $200,000. Being a singer, she has released many songs and it is the major source of her fortune.

Talking about her husband Brown, his net worth is around $2 million.

Katelyn hasn’t engaged in any news that has created a buzz in the media. Likely, she hasn’t faced any such rumors and controversial news yet.

The singer has an average height of 5 feet and 5 inches. And her body mass is around 58 kg. Likely, her body measurement is 32-26-35 inches.

Similarly, she has blonde hair with dark brown eyes. She has an inscription tattoo with the writing “God Is Greater Than The Highs and Lows ” on her right hand.

Similarly, she has her own YouTube channel with 16K subscribers.