Katherine LaNasa was previously married to actor Dennis Hopper. The pair married on 17 June 1989. They later divorced in 1992. The pair has a son together named Henry Lee Hopper. Later, she married comedic actor French Stewart on May 19, 1998. The couple met on a 1996 episode of ‘3rd Rock from the Sun.’

Currently, Katherine is married to actor Grant Show. The pair got engaged in July 2012. They later married on 18 August 2012. They have a daughter together named Eloise McCue who was born on March 21, 2014. 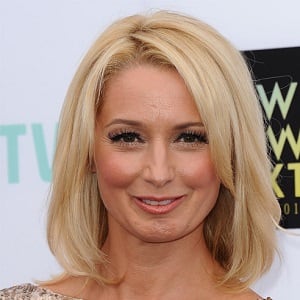 [on stifling the inclination to laugh while performing with Will Ferrell] I have tricks. I look between his eyes. I try to think of dead people.

Who is Katherine LaNasa?

Katherine LaNasa is an American actress, former ballet dancer, and choreographer. People mostly know her for her appearance in movies including ‘Jayne Mansfield’s Car’, ‘The Campaign’, and ‘The Frozen Ground.’ Additionally, she has also appeared in numerous television series including ‘Judging Amy’, ‘Two and a Half Men’, and ‘Longmire’ among others.

LaNasa was born in New Orleans, Louisiana on December 1, 1966. Currently, she is 55 years old. She was born to parents Anne (née Hardin) and Dr. James J. LaNasa Jr. Her father is a surgeon. Throughout her childhood years, Katherine enjoyed dancing. LaNasa is of American nationality.

Talking about her education, LaNasa attended North Carolina School of the Arts in Winston-Salem, North Carolina. In addition, she also had an apprenticeship with Milwaukee Ballet. Furthermore, she later danced with Salt Lake City’s Ballet West and the Karole Armitage Ballet.

LaNasa initially helped choreograph the 1989 film ‘Rooftops.’ In 1990, she made her feature film debut with a small role in ‘Catchfire.’ In 1992, she appeared in ‘Brain Donors’ and ‘The Heart of Justice.’ Katherine also had roles in ‘Flashfire’, ‘Jack Reed: A Search for Justice’, ‘Under Suspicion, ‘Mortal Fear’, and ‘Honey, I Shrunk the Audience’ in 1994. Since then, she has appeared in several other movies and television series. All in all, she has over 75 credits as an actress.

LaNasa has not been linked with any award nominations in her career.

LaNasa has not revealed her current salary. However, she has an estimated net worth of around $5 million as of 2022.

LaNasa became part of several controversies due to her involvement in the controversial movie ‘Love is All You Need?’ Furthermore, at present, there are no rumors concerning Katherine and her career.

Talking about her body measurement, LaNasa has a height of 5 feet 8 inches (1.64 m). Additionally, she weighs around 56 kg. She has a body measurement of 38-24-34 inches. Furthermore, her hair color is blonde and her eye color is blue.