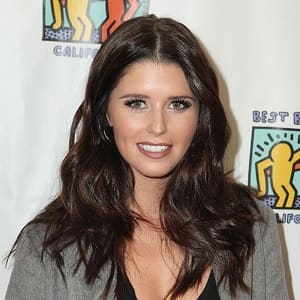 What is the relationship of Katherine Schwarzenegger?

Katherine Schwarzenegger is currently in a marital relationship with famous American actor Chris Pratt. Chris is famous for his roles as Andy Dwyer in the NBC sitcom ‘Parks and Recreation’ and Star-Lord in the Marvel Studios superhero film ‘Guardians of the Galaxy’.

The pair’s relationship was confirmed on July 18, 2018. Then on 8 June 2019, this couple exchanged vows. Katherine and Chris will soon welcome their first child.

Who is Katherine Schwarzenegger?

Katherine Schwarzenegger is an American author. Additionally, she is the oldest daughter of actor Arnold Schwarzenegger and broadcast journalist Maria Shriver.

In addition, she also has three younger brothers, Joseph Baena, Patrick, and Christopher Schwarzenegger. She is of American nationality.

Talking about her education, Schwarzenegger attended the USC Annenberg School for Communication and Journalism at the University of Southern California and graduated with a degree in Communications.

Katherine Schwarzenegger wrote a book titled ‘Rock What You’ve Got: Secrets to Loving Your Inner and Outer Beauty from Someone Who’s Been There and Back’ in 2010. Furthermore, her second book ‘I Just Graduated . . . Now What?’ is a survival guide for recent college grads.

She has also written a children’s book, ‘Maverick and Me’. Schwarzenegger released the book in 2017 and it tells of how she rescued and subsequently adopted her dog, Maverick. She is an ASPCA Ambassador.

Schwarzenegger has not revealed her current salary. Furthermore, there is no information available at present regarding her net worth.

There was a rumor going on which suggested that Schwarzenegger might be dating Chris Pratt. This later turned out to be true. Furthermore, Katherine has not been part of any notable controversies in her career.

Talking about her body measurement, Katherine Schwarzenegger has a height of 5 feet 8 inches (1.73 m). Additionally, she weighs around 57 kg or 126 lbs.

Schwarzenegger is active on social media.